Last week I saw a variety of columns more less praising Putin’s speech on his rationale for invading Ukraine (again). Generally, these weren’t so much support for Putin/Russia, as contrasting Putin’s knowledge of the past century of history versus senile Biden, whose puppeteers would probably object and ask about herstory.

But there’s a little bit of a problem with citing past historical possession or occupation to justify violating current boundaries: Whre do you draw the temporal line?

I ran across a meme that makes the point. Ace of Spades asks, “Who owns Moscow?” 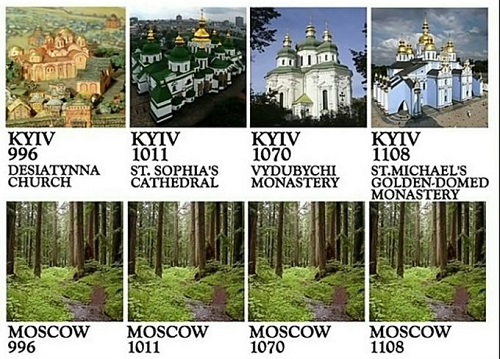 Yep, as far back as the Eleventh Century, Kievan Rus controlled Moscow, most of the western portion of what we call “Russia.” We call it “Russia” because the Rus ruled it.

It you want to go back further, the Greeks, Romans, and Byzantines all had a piece of the now-Ukrainian action at one time or another. Before that, Bulgars, Khazars, al the way back to the Gravettian culture.

Let’s go to the Rus. They seem to have been a collection of assorted people, but ended up ruled by “Rus” from Scandinavia, mostly Sweden. Does Sweden own Russia and Ukraine? Which Sweden, or other Scandinavian country? Borders were fluid, and rulers a matter of opinion and who had the locally concentrated power up until the 11th or 12th century.

This is a game everyone can play.

America. Controlled by the United States. But Native Americans — or whatever the heck woke term I’m supposed to use today — claim it’s theirs, and “we” stole it.

Depending on the tribe(s), who did they steal it from. There apprear to have multiple wave of colonization over thousands of years.

Of course, most of that seems to have come from Siberia. Since they got here first, does Siberia own America?

Is “historical (and prehistorical) precedent” stupid enough for you yet; or should I go on? Human history is colonization, conquest, mergers, and shifting borders.

But modern humans, Homo sapiens, weren’t here first. Much of Europe (and Ukraine specifically, to semi-stay on topic) was occupied by Neanderthals. H. sap. displaced them. But…

Depending on where you came from, modern humans tend to run 5-20% Neanderthal genes. Clearly got got pretty busy before we displaced them. Can the folks with the most Neanderthal DNA lay first — and current — claim to Europe? Specifically the Ukraine?

Now is arbitrary line-in-the-time-sands “historical precedent” stupid enough? Are you ready to accept that maybe, just maybe, current actions should be based on current borders…as internationally accepted?

Screw Putin’s “precedent.” He should just admit Russia is doing it because they think they can.