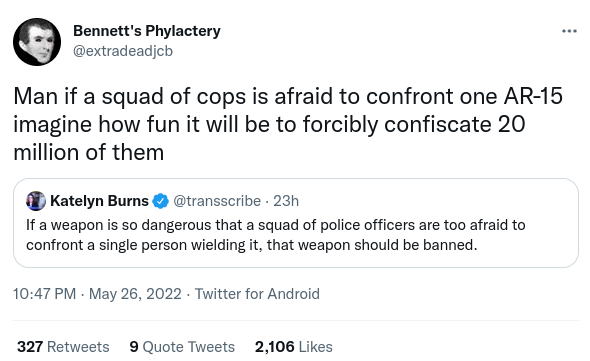 If a weapon is so dangerous that a squad of police officers are too afraid to confront a single person wielding it, that weapon should be banned.

Response: Man if a squad of cops is afraid to confront one AR-15 imagine how fun it will be to forcibly confiscate 20 million of them

Reminded me of something I wrote more than 7 years ago.

Two separated pairs of people, most seemingly with no or minimal training (guessing; based on unreliable muddia reports, one brother may have gotten some training in Yemen) are tying up roughly 90,000 allegedly trained, and well-armed, troops. a 1:22,500 ratio in manpower alone. Asymmetric warfare rules.
[…]
Four. For a few days.

There are probably at least 100 million gun owners in America.

Maybe they can do a little better than that. I haven’t seen an estimate of all the police deployed to the Robb Elementary shooting (1 shooter, 1 Bushmaster), but this says they sent nineteen officers into the school.

So maybe they do the AR- confiscation job with a mere…

Houston, we they may still have a problem.