You have got to be kidding me… 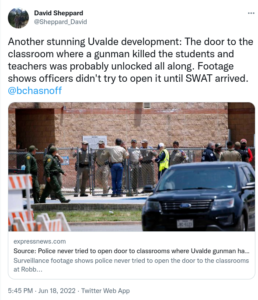 Another stunning Uvalde development: The door to the classroom where a gunman killed the students and teachers was probably unlocked all along. Footage shows officers didn’t try to open it until SWAT arrived.

The news report the tweet links to is paywalled. But I find the claim highly credible since 1) the killer managed to open the door and walk in, and 2) it would go far towards explaining why the cops think that it would be too embarrassing to release records to the public.

Since I haven’t heard about an outbreak of remorseful police suicides in Uvalde, I don’t think they’re embarrassed enough yet.

The school’s classroom doors are designed so that they lock automatically when they’re closed, and the only way to open them, ordinarily, is with a key, but the surveillance footage shows Ramos was able to open the door into classroom 111 at the school. Another door inside led to classroom 112.

He got into the school at around 11:30 a.m., entering through an exterior door that a teacher had pulled shut, but that door also did not lock automatically as it should have.
[…]
According to officials, three Uvalde police officers chased Ramos two minutes after he got into the school. The video footage shows he fired shots inside the two classrooms, came back out into the hallway, and then went back inside the rooms.

Scumbag went through that door twice. And apparently the second time the cops should have seen him do it. Maybe if the chief had a radio someone could have told him the door was unlocked.

4 thoughts on “[UPDATED] Uvalde Shooting: Were The Doors Unlocked The Whole Time?”