The Dims, with their compliant Repugnant cronies, have developed a new source of green, renewable energy.

For one-hundred ninety-two years, there was no general precedent for disarming a class of people, other than some discriminatory and racist laws banning the arming of Blacks and Indians, and the occasional religious group; I hope no one wants to bring that back. But I’m not too sure.

END_OF_DOCUMENT_TOKEN_TO_BE_REPLACED

David thinks this is a troll having fun provoking insane lefties into… unwise behavior. 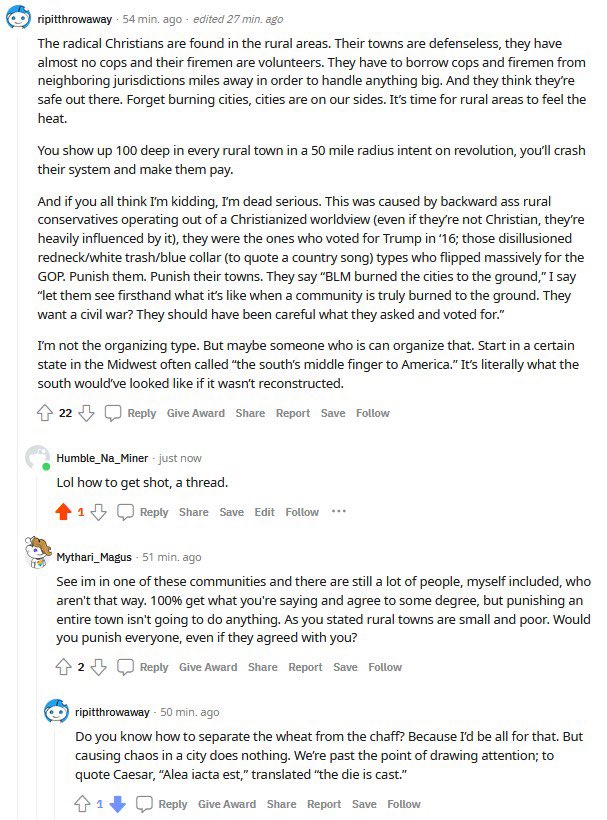 Defenseless? That’s not what those prowlers thought when the entire — well-armed — neighborhood mobilized to encourage them to depart.

We’re well-armed, and we have coyotes, gators, and pigs to handle the leftovers.

I have two new columns up over there.

NEVER BEFORE?
Suck it up, buttercup. But this…

He said that “the court has done what they have never done before, expressly take away a constitutional right that is so fundamental, so many Americans have already been recognized.”

Never before? I beg to differ. Gun owners have become accustomed to being stripped of a constitutional right by the Supreme Court since 1939. A right that, unlike abortion, is actually specifically listed in the Constitution.
[Read more]

RETURN OF THE VICHY NRA?
The NRA “compromised” to saddle us with the National Firearms Act (taxing and registering wide classes of firearms).

The NRA “compromised” to saddle us with the Gun Control Act prohibited persons, loss of mail order, and more).
[…]
It appears we can add another “compromise” to the list.
[Read more]

I had been watching congress.gov for the Gang-Rape Safer Communities Act, the “bipartisan” Senate gun control bill. I had the text, but I wanted the bill number. But it appeared that they’d fast-tracked it so much that congress.gov couldn’t keep.

But then I got an email from FPC that mentioned the bill number: S.2938, and all became clear

Why look at that. The permanent gov record of this rights-raping monstrosity shows that it was sponsored by Republican Marco Rubio. It was introduced October 2021.

That’s how they got the gun control bill to the floor so fast. They took a Rubio bill that had already passed the Senate and House. Then the oath-violating “bipartisan” victim-disarmers amended Rubio’s bill (which was originally just naming a court house), tacking on the BS anti-2A language.

It’s hardly the first time I’ve seen that. More often though, it’s someone rushing an “empty” placeholder bill into the bill queue — generally near the beginning of a session — with the plan to amend the real text in later. It’s a way to get ahead in line when your bill isn’t quite ready.

Other times, they’ll ask someone with a minor action bill if they can sacrifice his for the next text.

Somehow I doubt that they asked Rubio if he minded showing up in the record as the sponsor of this.

With the Left already freaking out over yesterday’s NYSRPA v. Bruen ruling in favor of the Second Amendment, we now have Dobbs v. Jackson Women’s Health.

We end this opinion where we began. Abortion presents a profound moral question. The Constitution does not prohibit the citizens of each State from regulating or prohibiting abortion. Roe and Casey arrogated that authority. We now overrule those decisions and return that authority to the people and their elected representatives. The judgment of the Fifth Circuit is reversed, and the case is remanded for further proceedings consistent with this opinion.

I agree with the end ruling, but I’ve not waded through the 213 pages of reasoning. But Alito wrote the majority opinion; from past experience, I’ll likely find his reasoning to be sound.

With these two decisions, I’m not going to surprised if someone tries more serious and professional assassination attempt on conservative Justices, just so the Dementia Administration can nominate a couple more leftist nutjobs to the bench.

On the other hand, since the administration is officially declaring they’ll just ignore Supreme Court rulings, maybe no one will bother.

Riots tonight should entertaining for those of us outside of the radius of total destruction.

NYSRPA v. Bruen has the left freaking out. Watching lefty talking heads is amusing, and yet a bit disturbing at the same time. So what; they’re just talking heads.

But have both the Department of Justice and the President of the United States ever before issued official statements declaring the Supreme Court to be wrong, and stating outright that they will assist states in continuing their infringements of human/civil rights?

In a case in which the federal government was not even a party?

If the the Supreme Court is no longer our court of last resort, if the rule of law no longer applies, what resort do the people have left?

I’m really seeing just one, and I don’t think filing “appeals” by caliber would be fun for anyone.

That does seem to be the path the Left wants to walk, though.

But I’d probably be pretty happy if presented with a steak the size of myself.

Pardon me if you found this too silly and cute. But it was this or the fucking senate and passage of a blatantly unconstitutional gun control bill.

And I need my blood pressure low enoug to sleep.

I confess: When the news gets too bad, I do decompress with cat videos. YMMV, but it works for me. 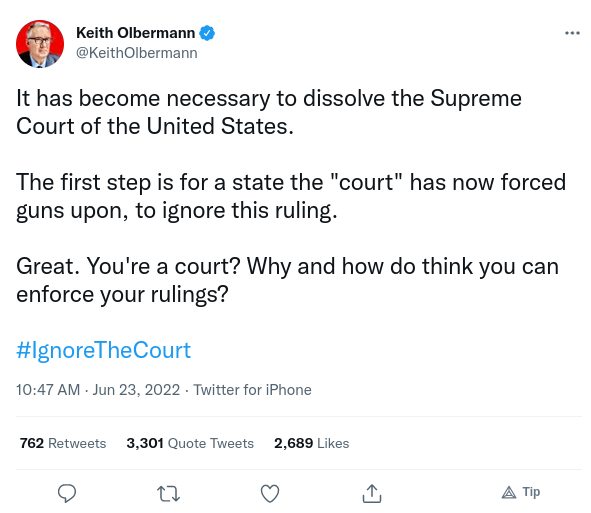 It has become necessary to dissolve the Supreme Court of the United States.

The first step is for a state the “court” has now forced guns upon, to ignore this ruling.

Great. You’re a court? Why and how do think you can enforce your rulings?

So now we can ignore court rulings we don’t like? Cool.

BTW, dumbass, their enforcers are called the US Marshals Service, and there are thousands of them.

Added: Hey, wait. Isn’t he advocating to overthrow a branch of government?

Uvalde School Police Chief Arredondo said ‘Tell them to f*cking wait’ as kids died
Radio logs released on June 22 are painting a clearer picture of the Uvalde school shooting timeline, and in one critical moment at 12:16 pm, a child was on an emergency line reporting that several kids were still alive and begged for police to enter. In response to the added pressure to breach the room, Chief Arredondo reportedly said, “Tell them to f*cking wait!” according to a timeline of radio communications posted to Twitter by CNN correspondent Shimon Prokupecz.

So much for his claim that he thought there were no more kids, and it was just a barricaded suspect situation.

I imagine there are some grieving parents who’d like to have… words with him.

But I assuming he’s going into hiding now.

Gonna be a disappointment for Cornyn.

If you haven’t read my TZP Column on NYSRPA v. Bruen, go read it. And think through all the implications. They’re still percolating up through my mind.

Moreover, the Second Amendment guarantees an “individual right to possess and carry weapons in case of confrontation,” and confrontation can surely take place outside the home.

Thomas also hammered home that all enumerated individual rights are individual, are fundamental constitutional rights not subject to scrutiny, and that yes states have to abide by this, too.

In the mid-19th century, many jurisdictions began adopting surety statutes that required certain individuals to post bond before carrying weapons in public.
[…]
the surety statutes presumed that individuals had a right to public carry that could be burdened only if another could make out a specific showing of “reasonable cause to fear an injury, or breach of the peace.”

A specific showing of “reasonable cause to fear an injury, or breach of the peace.” Doesn’t that sound remarkably like a red flag law accusation? And yet, having and carrying that gun is still a fundamental right. The government couldn’t take it from the “accused” (of a possible future action). Elsewhere, Thomas also addressed the fact merely having a gun is not threatening.

All they could do — constitutionally — was make that one accused person post a bond — have insurance — to keep and carry the gun.

Due process issues aside — big as they are — red flag laws disarming someone who hasn’t yet committed a crime are still unconstitutional.