We have a dinner invitation to my niece’s house this evening. Normally that would hardly be a problem. But her sister is in town.

That niece and her family now refuse to acknowledge my very presence; I’m invisible and inaudible to them.* I wouldn’t go, but I have to drive my sister there.**

And no, I don’t know why I turned nonexistent. My niece has long disliked me — again, for some unknown reason — but the refusal by her and her kids to acknowledge my existence only started a few years ago. She used to be polite, at least.

I’ll take a book and sit outside. (Which I wish I’d remembered to bring to  the wedding/reception this past weekend; yeah, they were there, too.)

Sorry; I usually keep unpleasant personal stuff off the blog (other than finances, I guess). For some reason this seemed worth noting.

* Her youngest still sees me. I think that’s because she’s too young to know better. She doesn’t speak to me.

** She doesn’t want to risk driving for now due to the possibility of a stroke while behind the wheel. 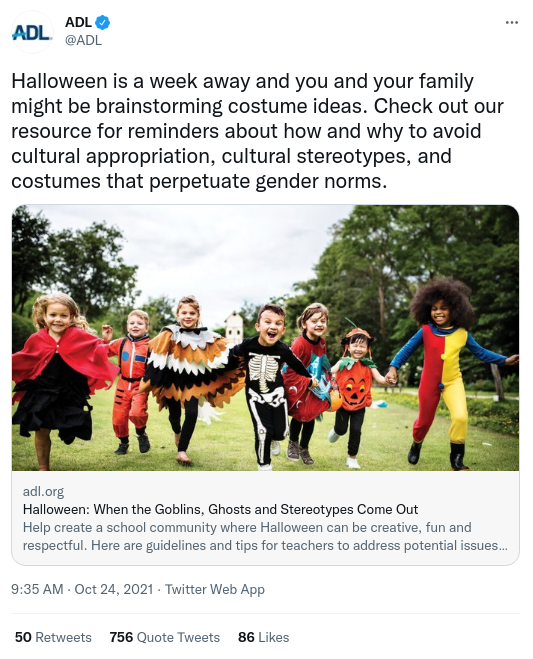 Halloween is a week away and you and your family might be brainstorming costume ideas. Check out our resource for reminders about how and why to avoid cultural appropriation, cultural stereotypes, and costumes that perpetuate gender norms.

The ADL is — allegedly — a Jewish anti-antisemitic group; shouldn’t they properly be posting in Hebrew, if they believe this shit?

Got something to run through the Universal BS Translator.

Dems plan billionaires’ unrealized gains tax to help fund $2T spending bill
“I wouldn’t call that a wealth tax, but it would help get at capital gains, which are an extraordinarily large part of the incomes of the wealthiest individuals and right now escape taxation until they’re realized,” Yellen said on CNN.

Output: How outrageous that these people don’t pay income tax on income that they haven’t had. Tax their wealth and take it away from them.

It’ll be interesting to see how they write such a bill, for this only to apply to “billionaires…”

And you and me, as well, given the equal protection clause.

…was more of a brag than a motto, Breitbart.

The Washington Post, the leftist legacy media outlet whose motto is “Democracy Dies in Darkness,” admitted to publishing fake news about the public’s discontent with floundering President Joe Biden.

Kellogg’s slapped with $5M lawsuit over Pop-Tarts’ strawberry filling
The lawsuit, filed in late August by Anita Harris in the U.S. District Court Southern District of Illinois East St. Louis Division against Kellogg Sales Company, argues that the Kellogg Sales Company is misleading consumers by promoting the breakfast pastry’s strawberry filling in its labels and marketing, giving an impression that the fruit filling contains “a greater relative and absolute amount of strawberries than it does.”

Harris pointed out that more Americans are eating strawberries because of “one of the highest levels of nutrient density of all fruits” and “‘an excellent source of vitamin C,’ necessary for immune and skin health.”

I can safely safe I never ate a Pop Tart or other similar toaster pastry for the vitamin C.

She’s gotta be a Dim-ocrat. And she doubled down on the stupid:

The company’s “Frosted Strawberry Toaster Pastries” contain 2% or less of “dried strawberries, dried pears, dried apples” and “red 40,” according to its nutrition label.

“The Product does not reveal the addition of this artificial coloring anywhere other than the ingredient list,” court documents further stated.

Yeah, because that’s what the “nutrition facts” box is for, so those who give a damn know where to look for that information. Which the filing seems to indicate she read.

Oh. Wait. She may have an excuse for being stupid (and Dim-ocrat): East St. Louis. Sadly, this means if she gets a jury trial, they’ll be her peers and she’ll probably win. Maybe she’s not quite so stupid.

Over at The Zelman Partisans, I’ve written a little about just who should be held responsible, and how, for Alec Baldwin’s killing of one and wounding of another. More stories keep coming out about the armorer.

If this is accurate, “Armorer” Hannah Gutierrez Reed has some problems. TMZ.com is claiming:

Multiple sources directly connected to the ‘Rust’ production tell TMZ … the same gun Alec Baldwin accidentally fired — hitting the DP and director — was being used by crews members off set as well, for what we’re told amounted to target practice.

We’re told this off-the-clock shooting — which was allegedly happening away from the movie lot — was being done with real bullets … which is how some who worked on the film believe a live round found its way in one of the chambers that day.
[…]
There’s also this … one source who was on set and familiar with the goings-on of the crew tells us that when cops showed up, they found live ammo and blanks were being stored in the same area — another possible explanation for how an actual bullet slipped got in the gun.

I’m leery of unnamed sources, but this is consistent with other claims of lax-to-downright-sloppy on-set procedures.

Again, if true, was Reed allowing this? Or was she simply leaving the firearms unsecured? Why live ammo; was it so that crew members had supplies for recreational shooting? Does the insurance company know? Miss Reed appears to be well into “reckless.”

Then there’s this NYPost report.

The “inexperienced” armorer in charge of weapons on the set of Alec Baldwin’s movie “Rust” had given a gun to an 11-year-old actress without checking property for safety, a report said.
[…]
“She was reloading the gun on the ground, where there were pebbles and stuff,” one source told the outlet. “We didn’t see her her check it, we didn’t know if something got in the barrel or not.”

This incident allegedly occurred on set for the movie “The Old Way.”

If there’s any question, you check. If people will give sworn depositions confirming these incidents, Reed had best start working on a plea deal. And then there’s the civil liability all around.

Glad I ain’t them. But if I was them, it wouldn’t have happened, because I’m not an idiot.

DEAR HOLLYWOOD — AND ALEC BALDWIN SPECIFICALLY,
You have a systemic problem, and it isn’t just racism.

Hey, if the left can perceive a systemic problem based on a single alleged event, then I can do it for a single two three four negligent discharges.

I’m starting to see this UK report pop up.

Nope. That data does not show people getting Acquired Immunodeficiency Syndrome. The Expose has confused “vaccine efficacy” with immunosuppression. The data presented only shows that the pseudo-vax becomes less effective against SARS-CoV-2 over time. It does not show why that seems to be the case.

The effectivess can drop for other reasons, like SARS-CoV-2 variants not as well recognized by pseudo-vax-prompted antibodies.

The data we need to be able to say that the pseudo-vaxxes cause AIDS is comparisons of lymphocytes in the blood:

To date, I am aware of one case of this being done, by doctor who was concerned about a specific patient. He did see a significant drop in lymphocytes, which he specifically compared to AIDS. He called for more doctors to check this.

There is also a report that “Pfizer data shows significant lymphocyte depletion in the first week after vaccination.” I have not seen that data.

Perhaps the pseudo-vaxxes are causing AIDS, but The Expose story does not support their own claim.

The state Supreme Court just tossed Cook County’s “violence tax” (which did not actually direct the money “to any fund or program specifically related to curbing the cost of gun violence on firearms and ammunition”).

That’s a no-brainer, obviously. But I’m astonished that they were honest enough to admit it.

Walmart recalls room spray for “rare and dangerous” bacteria linked to 2 deaths
The retailer sold about 3,900 bottles of Better Homes and Gardens-branded-Essential Oil Infused Aromatherapy Room Spray with Gemstones in six different scents, according to a recall notice posted Friday by the Consumer Protection Safety Commission.

The Centers for Disease Control and Prevention tested a sample of the product this week and found it contained the bacteria Burkholderia pseudomallei, which causes melioidosis, a rare but serious disease with about a dozen cases reportedly annually in the U.S.

Ho hum. Another recall. I don’t do that aromatherapy crap, so… Wait a minute.

Consumers are urged not to use — or even open— the recalled spray. Instead, they are advised to wear gloves and double bag the bottles in zip-top clear resealable bags, which should be placed in a small cardboard box and returned to a Walmart store for a refund. The company is also offering a $20 Walmart gift card for customers who return the product.

SAFETY: As soon as Burkholderia is suspected, perform ALL further work in a Class II Biosafety Cabinet using BSL-3 practices.
(emphasis in the original)

Aromatherapy: Think of it as evolution in action.