Susan Rice Dismisses Critics of Biden Student Debt Forgiveness Plan Who Already Paid Off Loans
But Rice indicated just because some people paid off their loans did not mean that other Americans should not receive student loan forgiveness.

“By that logic, we would not help anybody in this country,” she said.

Lessee… what was that again?

“We the People of the United States, in Order to form a more perfect Union, establish Justice, insure domestic Tranquility, provide for the common defence, promote the general Welfare…”

“The Congress shall have Power To lay and collect Taxes, Duties, Imposts and Excises, to pay the Debts and provide for the common Defence and general Welfare of the United States…”

GENERAL, bitch. If you’re doing something for the benefit of a select few who made bad choices, it is not the general welfare of the United States. It’s pork for special voting interests.

What you are doing damages the general welfare of the United States. It works like so:

Idiot takes out loan for a nonbinary intersectional yoga degree in Starbucks barista-ry. That money comes from depositors (or taxpayers; and we won’t get into fractional reserve banking right now). At this point, it’s zero sum; merely money moving from point A to point B.

Diligent people pay their loans back, plus some interest. Still zero sum; money moves back from point B to point A, plus a little interest which can be viewed as the value of the education, but it’s still money moving.

No money was created, just moved around on a time-delay.

Now, idiots in the federal government — some of whom owe on their own student loans — decide that money doesn’t have to move back to point B after all. The government will cover it (depending on circumstances) with newly printed money.

That is monetary inflation.

No, inflation is not “rising prices.” Rising prices are one rule of thumb proxy indicator that the monetary supply has been inflated, and too many newly printed dollars are chasing too few products. But rising prices can be caused by other factors like supply and demand for the product.

Except for special interests, inflation is a bad thing. Inflation does not promote the general welfare; it hurts it.

Future cyberarcheologists will be baffled as to why people took cameras into the bathroom, took pictures of themselves in the tub or shower, or on the crapper…

Right up there with installing every tracking app in the smartphone store, then whining about being tracked.

A great place to be from.

Tennessee’s largest school district’s superintendent resigns amid investigation regarding abuse of power
A board resolution says it took action “to review the allegations to determine whether Superintendent Ray, during his tenure as Superintendent, engaged in relationships with District employees violative of MSCS policies.”

In a statement posted on Twitter, Ray thanked colleagues for their “many, many small but powerful acts of devotion and commitment.”

Small acts of devotion… is that what you call it?

I never understood why the then-working county schools system agreed to merge with the broke and broken city system. I always assumed bribes (it being Memphis), but I don’t know that.

Toronto cops got another deadly weapon off the streets 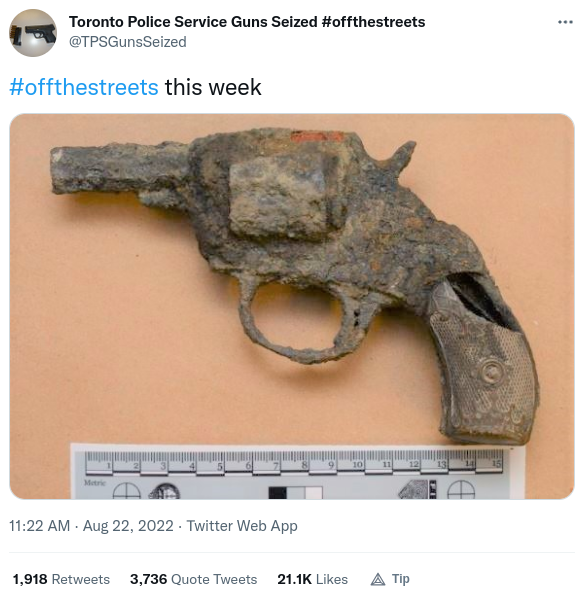 More like from under the streets. That looks like it’s been corroding away in earth for decades.

Not an accomplishment I’d be bragging on.

Added: David Codrea made the very same observation, which I saw after I blogged this.

I was reading an article about schools paying millions to install panic buttons, when I came across this line.

Back in 2015, Arkansas unveiled a smartphone app that more than 1,000 schools would be able to use to contact 911.

It would never have occurred to me to peddle an app that lets people call 911 from their phone. But it turns out that this is a real thing.

It seems to me that using the phone’s built-in feature to put direct dial contacts on the main screen would a lot faster and cheaper, but I’m not a corrupt politician or bureaucrat digging into what I figure are the taxpayers’ bottomless pockets.

“Mengele” Fauxci will retire. The really damning docs in the Pfizer FOIA data dump must be coming in January.

Anthony Fauci Announces He’s Retiring in December
Dr. Anthony Fauci said on Monday he would step down from his positions as director of the National Institute of Allergy and Infectious Diseases and as chief medical adviser to U.S. President Joe Biden in December.
He would also step down as chief of the NIAID Laboratory of Immunoregulation.

Christian school refuses to change long-held policy excluding sexual behavior despite alleged death threats
A private Christian school in Florida is not backing down from a long-held policy that students not partake in sexual behavior outside of marriage despite alleged death threats against school leaders and accusations that the school is targeting gay and transgender students.

It’s a Christian school; what do people expect?

I like that they could only find one parent allegedly pulling her lesbian daughter out of the school. I’m sure the hundred-or-so people on the school’s waiting list appreciate her generosity.

Why is this somehow newsworthy, shocking?

LISTEN: Steve Bannon calls Hillary Clinton a ‘b****’ in leaked recording
Former White House strategist Steve Bannon was heard calling Hillary Clinton a crude name in a leaked recording discussing former President Donald Trump’s victory in the 2016 election.
[…]
“Even in ’16, people just had to make a decision,” Bannon was heard saying. “They didn’t like Trump, but they hated Clinton more. Why? When I came in, I’m the expert at driving negatives up. Right? I had been on 10 years on that b****. I just beat her. I just beat her every day, right?”

Who hasn’t called her a bitch?

ALEC BALDWIN: SPIN, SPIN, SPIN
Yes, I’m a little late to the game. I wanted to be sure I had all the relevant reports from officialdom. I think it’s generally better to be accurate, than rapidly off target.

Alec Baldwin and his attorney are spinning like tops, trying to counter the — expected — damning report on the forensic examination of the firearm Baldwin used to kill Halyna Hutchins.
[Read more]

The FBI found Baldwin’s gun to be in such poor condition it failed to fire? The medical examiner called it an accident?

I used to live in another small town. There was exactly one strip club in town, and its phone number was one frickin’ digit off from my personal phone number. I was always getting wrong numbers. I learned to deal with it.

I had no idea they ran specials, but…

A bit nastier, but he asked for it.

I tried playing it straight for once. “You calling Teasers? You’ve got the wrong number.” I hung up.

Ooo-kay then. “Monique ain’t here. She just left with some guy and said she’d be back in an hour or so. Try then.”

I’m a bad person. To assholes.

Back before CallerID was ubiquitous, and telemarketers were human(ish), I had another way of screening them on my landline.

“Special Agent Smith, Telephone Fraud Division. How may I help you, sir or madame?”

The response to that one was invariably an instantaneous -click- of disconnect.