Not sure how this will turn out. In France, the convoyers breached the police blockade and got into Paris. Now there’s video of police tear-gassing restaurants full of men, women, and children. They did’t look like protesters to me; just families sitting down for meals.

If the police wanted to drum up more support for the protesters, I’d guess this was the perfect way to do so.

This should work out well.

BREAKING: Canadian judge issues ORDER on trucker blockade on Ambassador Bridge
Friday morning, Ontario Premier Doug Ford declared a state of emergency, and announced there would be fines of up to $100,000 and a year in prison for blocking key routes, including bridges, highways, and pedestrian walkways.

“We will also provide additional authority to consider taking away the personal and commercial licenses of anyone who doesn’t comply with these orders,” he also threatened.

Trudeau also threatened the truckers on Friday, saying, “If you joined the protest because you’re tired of Covid, you need to understand, you’re breaking the law.”

“The consequences are becoming more and more severe. You don’t want to end up losing your license, end up with a criminal record, which will impact your job, your livelihood, even your ability to travel internationally, including to the U.S.”

Sure. Reduce the number of avaliable truckers even more. AT that rate, they won’t need to blockade the bridge because they’ll run out truckers to drive cargo over it.

CNN analyst Juliette Kayyem has a solution to the Canadian Freedom Convoy truckers. 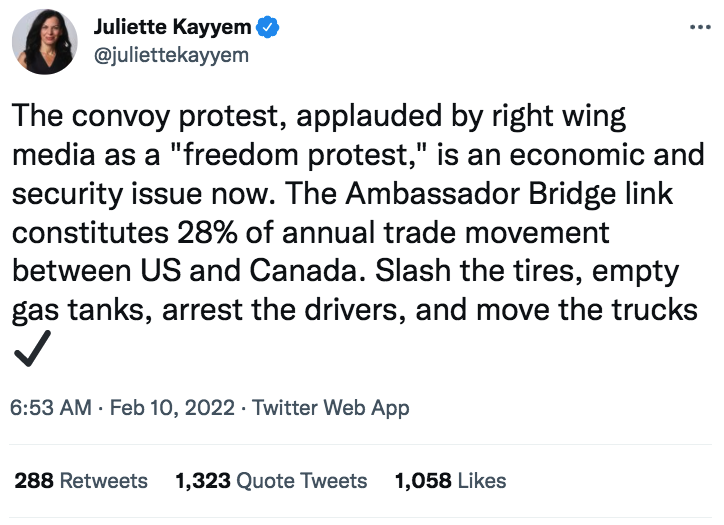 “Slash the tires, empty gas tanks, arrest the drivers, and move the trucks”

Brilliant. Most folks seem to be noting the difficulty in moving trucks with flat tires and no “gas” (generally diesel for the big haulers). But I would like to encourage this freaking idiot to put her words into action. Bless her heart. Slash some big rig tires, hon.

And the coroner will need a shovel to collect your remains. The truckers might let you do it, just to watch you commit suicide.

Also, I’ve seen a couple of reports that Michigan Governor Halfwitmer has offered some “heavy equipment” to move the trucks off of the Ambassador Bridge between Detroit and Windsor. Again, just do it.

Have you ever seen the damage that dozers, big enough to move those trucks, do to landscape and roadways? My sister speculated that the moron might have been offering National Guard tanks. Oooh, yeah. I remember the Army guys running around behind tanks in Germany, with cash and vouchers to cover damage claims during every REFORGER exercise.

Move the trucks with bulldozers or tanks and the truckers won’t need to barricade the bridge. It’ll be closed for quite some time for reconstruction.

…that I find USCP Chief Manger less credible than a politician.

The Effingham resident died March 24, 2021, a day after the Moderna vaccine was administered to her in Jefferson County.
[…]
Colt Umphenour, one of Evans’ sons, said the family intends to file suit.

She voluntarily took an experimental medication that is allowed under an Emergency Use Authorization. Moderna has immunity. And even if it had been approved, lawsuits are very tough. And frankly…

Evans, 68, had a medical history of hypertension, environmental allergies, allergic disorder and reactive airway disease — which wasn’t asthma — and had experienced previous anaphylactic reaction to the drug Albuterol, the autopsy report said.

With that allergy history, she shouldn’t have gotten the pseudo-vax at all.

Again, I have no idea who they think they’re going to sue. Maybe there was some dumbass employer mandate, and they’re going after that company.

This is pretty cool.

Herschend Enterprises’ pilot program, titled GROW U, will be implemented for its 11,000 employees — seasonal, part-time or full-time — across its 25 parks, including Dollywood, according to a press release. The company is offering more than 100 fully-funded diploma, degree and certificate programs, and will also provide partial funding for 150 additional programs in fields such as hospitality, engineering, human resources and art design.

I especially like that it’s for degree programs that can lead to actual gainful employment, not feminist studies or underwater basket-weaving.

And I had no idea that Dollywood and Silver Dollar City were part of the same outfit. Never been to Dollywood, but I went to Silver Dollar City as a kid; it was fun. So this is a bit more encompassing than the headline would indicate. When I saw that, my first thought is that it sounded like Dolly Parton. Look up her philanthropic activities; she’s pretty amazing and classy.

NICS Denials And Criminal Investigations
I received a GOA alert about S.675 – NICS Denial Notification Act of 2021, so I thought I would check it out.

On the bright side, it’s unlikely to go anywhere. It was introduced 3/10/2021 and was immediately referred to committee where it has sat ever since.

Downside? It’s a mess. Here’s the meat of the bill.

Per the Wall Street Journal…

“What are your pronouns?” is a seemingly innocuous question that has become increasingly common.

This is common now? I guess I need to get out more. Because I have never been asked for my “pronouns.”

And have you noticed that these “pronouns” are always the terms one would use to discuss someone in the third person? Face to face, in person terms would be “me,” “I,” “you.” So these loonies declaring their nonstandard crazy “pronouns” aren’t just asking you to address them in a certain way; they’re demanding that people that may not even know them acknowledge their chosen identity schizophrenia, to accept mental illness as reality.

In the unlikely event that someone demands I use some — obviously incorrect — pronoun for… them, I will apply my own pronoun: that fucking nutjob.

I figured WTH, and ordered my “free” COVID tests. They arrived. Today. 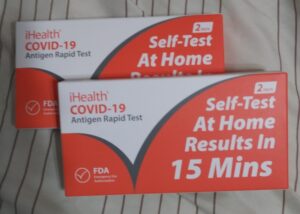 In Georgia, new daily cases have been declining since late December. So, naturally, our ever-efficient federal government only started taking orders after that, and well… received today.

Unless I happen to get sick, which hasn’t happened yet in the two years plus of this fiasco, those are going to sit unopened. Unlike the hypochondriacs I’ve heard about, I’m not going to test myself to see if I’m sick.

And yes, as you’ve likely heard, they’re made in China.

CNN’s Brian Stelter: People Trusting Joe Rogan Over “Newsrooms Like CNN” Are “a Problem That’s Much Bigger Than Spotify”

I suppose a key ratings drop of 90% in a year is a “bigger problem”… for CNN and Mr. Potato Head.

I actually saw some CNN “news” yesterday, while I was in the waiting room for my doctor’s appointment. Several minutes of how Vice President Kneepads almost died on January 6th, because she drove within yards from the DNC “pipe bomb,” and was in the building for a couple of hours.

And The fricking View came on.