The Dems know perfectly well that their little commie agenda isn’t going over well with Americans.

They ignored a year of left-wing riots (except when they were encouraging them). But a few hundred people show up at the Capitol and don’t much more than break some windows, and the Dems freak: Concrete barricades, 12 foot fences, mile of razor wire. The Capitol police — just the Capitol, mind you; not DC police department — have over 2,000 officers. They want to bump that up by another 10%. We have troops garrisoning the Capitol. They want to make that permanent.

The Democrats are scared. You might think that sane people would look around, realize that it’s their own actions that they believe will cause America to rise up with pitchforks, torches, guns, and nooses and take them out, and wonder, “Hey, maybe we shouldn’t be doing this.”

Nope. They know their agenda is unpopular, and they don’t care. They are consolidating their power. The hell with the peasants.

They think they can neuter the police and register, license, and ban guns. Not sure how that’s going to work. Who’s going to be left to kick in doors, arrest the noncompliant, and confiscate property? (And those millions of first-time gun buyers didn’t buy them just to have something to turn in.) I suspect the plan is to use the military; that would explain why the first thing they had the Pentagon do after the inauguration was stand down and purge conservatives and Constitutionalists. They think that will leave them a military force who happily jackboot their way across the country.

In my admittedly out-dated experience, that purge is actually going to leave them with the least competent and effective personnel.

Those open borders? David Codrea has long noted that Dems like that because those illegals overwhelming lean Democrat; so once they’re here, and the Dems let them vote… Dems can steal office in the country. I used to think that, too. But now my thinking has changed.

2020 demonstrated that the Dems do not need those future voters. They can manipulate the elections already. And their HR 1 – For Fuck the People Act will codify their system of fraud. So why are they importing illegals now?

Nah. It isn’t cultural terraforming. It’s cultural replacement. Current Americans don’t really want to live in a banana republic, with intermittent “green” power. We’ll just have to go. And be replaced with folks already used to that shit, who’ll be quiet so long as the Dems hand out enough bread.

The Dems are consolidating power towards that end… but they’re — some, at least — smart enough to know there will be strong… objections. Hence Fort Pelosi, and Secret Service protective detail (complete with those armored SUVs) for… Democrats. Not for Republicans. The Dems know who any early lunatics will be gunning for.

Sadly, as the Dems tighten the jaws on their Constitution-cracker, some nuts will crack. I’ve made a private prediction about the next several months. I’m not going to document it here because I do not want to give any mentally ill fringe freaks additional ideas. But expect it to be bad, and for the Dems to cry, “See? We told you,” and push back even harder.

Hunting season has been declared.By the Dems, and that’s why they’re hiding behind their walls and fences.

The server was down for a goodly part of the day, and responding slowly when up. No word on what caused it.

I use a free hosting service, which doesn’t even place ads on the site, so I really can’t complain.

Royals. I’m not into that stuff. We gave it up centuries ago. For a good reason (extending well beyond taxation).

That’s one reason I try to ignore all the Harry and Meghan junk. It doesn’t interest me. But I’m now forced to deal with it. Headlines keep showing up — entirely unwanted — in my news feeds.

OK. Just from the headlines, because I’m not reading the reports, I’ve unfairly drawn a conclusion:

Meghan Whatserface is an ignorant, entitled brat who failed to ask questions about what she was getting in to, marrying into a royal family. Things like duties. Instead, she made some unwarranted assumptions based on her extensive knowledge of Disney princesses.

Now grow up, and get out of my feeds. I have work to do.

This is the four layers of fences artound the Minneapolis courthose where the Chauvin trial is to be held. 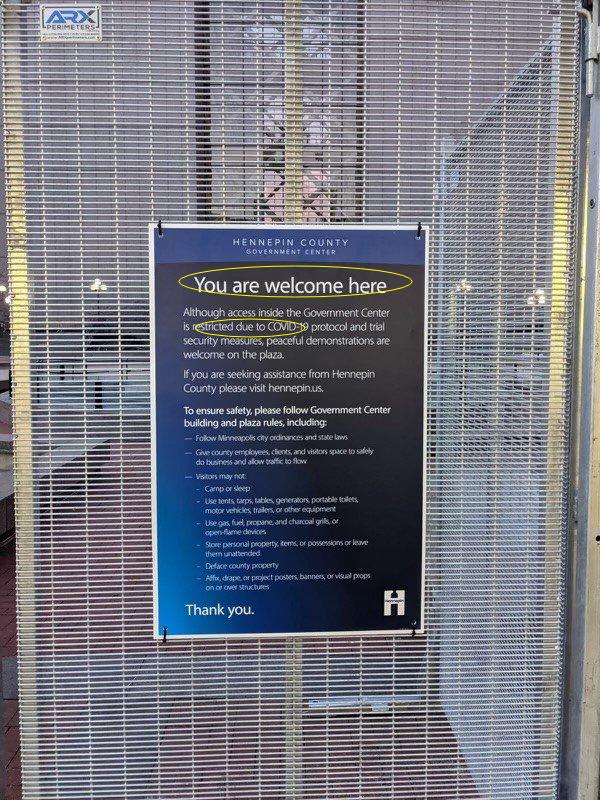 But seriously? Suggesting that the fences are to stop ChinCOVID?

Fauci: Current Coronavirus Plateau Unacceptable — We Need Stop Masking ‘Carefully and Slowly’
And historically, if you look back at the different surges we’ve had, when they come down and then start to plateau at a very high level, plateauing at a level of 60 to 70,000 new cases per day is not an acceptable level. That is really very high.

pla·​teau | \ pla-ˈtō
1 : a usually extensive land area having a relatively level surface raised sharply above adjacent land on at least one side : tableland
b : a similar undersea feature
2a : a region of little or no change in a graphic representation
b : a relatively stable level, period, or condition
3 : a level of attainment or achievement

Wanna see the “plateau” in my state? 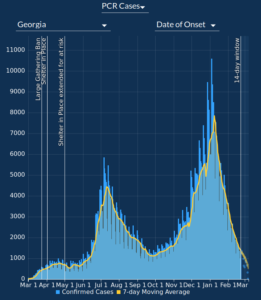 And here’s the US (bear in mind that Worldometer uses fake numbers to boost cases count). 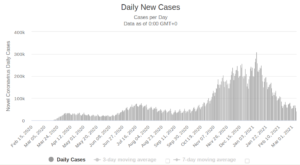 Obviously “plateau” has a different meaning in Faucish.

I’ve got a few new-to-here features which you’ll find in the left hand sidebar. New to here, because these were on my old Random Acts of Gibberish blog, hosted on WordPress. I got so disgusted with their “upgraded” editor that I abandoned the blog. I had planned to delete it, but someone pointed out the there were years of material there that people still link to. So I just archived it. There is over six years of posts there; you might want to look it over.

But in our “cancel culture” age, I don’t trust WordPress not to decide I’m guilty of wrong-think and kill it anyway. I particularly wanted to make sure certain works were preserved.

Remedial Practical Civics 100 is a series of imaginary classroom lectures and supplemental material meant to teach people — especially younger folks — what they should have learned in school about how the political system is supposed to work… and how it really does. I add new lessons as the fancy strikes me.

Free Books is just that. For a while I tried my hand at science fiction. That resulted in a couple of novels and several short stories in a world where government and the system collapsed… Hey, wait. -looks around- That’s starting to look real familiar again. Anyway, the stuff never sold well, but occasionally people did want to read them for some reason. So they’re here for free. All PDFs. Helpt yourself.

The Tip Jar is there on the odd and remote chance that someone wants to reward my work here. Really. It has happened.

Took a look at site stats, and see that it isn’t even 11AM yet, but I’ve already gotten more traffic this morning than I usually see all weekend. Thanks!

It isn’t real clear from referrer logs just where you’re all coming from. Several from Twitter, but not the specific tweet.

SARS-CoV-2 is the coronavirus that causes the disease “COVID-19”.

SARS-CoV-2 is a variant of a previously identified coronavirus in bats. (No, this isn’t a discussion of how or where that variance happened). No surprise, because mutate is what viruses do. But it was a variant, and got a new name.

Or are we simply going to keep expanding the definition of “SARS-CoV-2” forever just so the so-called authorities can keep “justifying” stupid, ineffective masks, lockdowns, and near-total control of people in a fashion that would make Stalin proud?

Seriously: When the virus has changed so much that you doubt the efficacy of a vaccine or antibodies developed for the original strain, isn’t it time to call it something else, and stop padding the “COVID-19” numbers?

Print this out; hard copy. When future generations ask, “How the hell did that happen?” you’ll want to hand this to them. I’m not betting that they’ll still have working computers. Or electricity. I’m just hoping they can still read.
END_OF_DOCUMENT_TOKEN_TO_BE_REPLACED 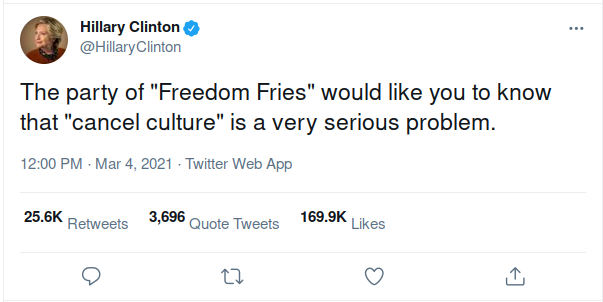 The party of “Freedom Fries” would like you to know that “cancel culture” is a very serious problem.