OK, this is disturbing. Let me start with a recap of the background.

The COVID-19 SARS-CoV-2 PCR test, used to screen for ChinCOVID, was originally created without access to the actual virus. In very short form, they looked at a Chinese public database of what the Chinese said was a partial nucleotide sequence of SARS-CoV-2. Two sequences were selected from that. Then they assumed that a third sequence found in the original SARS virus would also be in SARS-CoV-2. They then prepared a series of reagents to detect those sequences.

That is what the CDC published.

While it turns out there serious problems with the creation of the test, in theory I would consider this an acceptable interim emergency test for what they thought at the time was a disease with a fatality rate of 10% or more. But as soon as physically possible, they should obtain an actual sample of the virus, an isolate, sequence it, and create a new test for sequences now determined to be in the actual virus (preferably sequences unique to SARS-CoV-2).

Now for the WTF.

This morning, I realized that the CDC has been revising their CDC 2019-Novel Coronavirus (2019-nCoV) Real-Time RT-PCR Diagnostic Panel. As of the seventh revision on July 21, 2021, this year, they still say

Since no quantified virus isolates of the 2019-nCoV were available for CDC use at the time the test was developed and this study conducted, assays designed for detection of the 2019-nCoV RNA were tested with characterized stocks of in vitro transcribed full length RNA…

Twenty months into the so-called pandemic, and they were still saying they didn’t have a sample of the actual SARS-CoV-2 virus to sequence. I repeat, WTF?

Never mind the questions this raises about whether the PCR test really detects SARS-CoV-2 (or something else?), or if there is a SARS-CoV-2 to detect, think about the pseudo-vaccines. They were all developed prior to 7/21/2021, naturally.

Someone please tell me, with links to supporting documentation, that someone has isolated SARS-CoV-2, and has confirmed the sequences (and thus the spike protein).

Not so fast. I noticed this was based on a paper in World Psychology. It’s been my experience that psych papers tend be even worse than “claimate change” research. Let’s take a look at the paper.

OK, they found something. But the factors they controlled for to get that result seems a little… limited. Oh wait.

When we matched SUD and non-SUD individuals for lifetime comorbidities and adverse socioeconomic determinants of health, the risk for breakthrough infection no longer differed between these populations, except for patients with cannabis use disorder, who remained at increased risk (HR=1.55, 95% CI: 1.22-1.99).

So when they controlled for poor health and poverty, the differences mostly go away. Marijuana use still shows a slightly higher risk, but not double that of non-users.

So they didn’t really find much of a link between marijuana use and COVID. They found a link with poverty and poor health, which hardly comes as a surprise.

So Walgreens is developing the nasty habit of injecting nonconsenting people with ChinCOVID pseudo-vaccines when they came in for flu shots. How does that happen?

Here are the vaccine instructions for the Pfizer jab (which is what the family of four got assaulted with. You thaw the vial, mix in normal saline diluent, and draw 0.3 ml doses into syringes.

And here are the instructions for the flu vaccines (several). Short form, depending which you’ve got: Take the single use syringe and administer one 0.5 to 0.7 ml dose per customer.

If you have a multi-dose vial, draw one 0.5 ml does into a syringe per customer.

For the flu vaccines, note the lack of thawing and mixing, and the distinct difference is dosage.

How do you confuse them?

What dosage of the pseudo-vax are these “mistake” victims receiving? Is it the correct 0.3 ml (for adults) of diluted medication? Or are the perpetrators confusing the vials and giving them 0.5 to 0.7 ml of undiluted Pfizer crap?

If the person thinks the folks are in for the Pfizer shot, why are they giving it to four and five year-olds?

This makes sixth cases of Walgreens “accidentally” giving people Pfizer pseudo-vax shots instead of flu shots, that I’ve heard about.

They say it happened October 4, at the Walgreens on St. Joseph Avenue.

The family of four includes two adults and two children who are just five and four years old.

That pseudo-vax is only authorized for 12 and up. That’s a hell of a “mistake.”

This is looking a lot more like policy than “accident” now. This is happening at Walgreens across the country. Someone needs to burn for this.

Tuley says the children have been taken to a pediatric cardiologist, and the family was told both are showing signs of heart issues.

Denmark and Norway advise against the Moderna pseudo-vaccine for those under 18. Myocarditis and pericarditis, i.e., heart inflammation.

Sweden and Finland suspended Moderna for those under 30. Myocarditis and pericarditis.

Iceland just suspended Moderna completely. Myocarditis and pericarditis. Plus, it wasn’t working. 88% of their over-12 population vaccinated, and cases are still surging.

I’m not sure how other countries are dealing with liability (I understand Pfizer includes lawsuit liability as a purchase contract condition), but in the US they’re essentially immune to pseudo-vax lawsuit. But at this rate…

I wonder if they think they’re immune to bullets fired by irate survivors and family members.

Vin Suprynowicz has an excellent compilation of ChinCOVID reports. It’s pretty much a one-stop shop for all your COVID data needs.

Two items in particular caught my eye. One, I knew about, but Vin’s link had more details. While VAERS reports around 16,000 pseudo-vax related deaths, someone at CMS (Medicare/Medicaid) leaked another dataset. CMS shows over 48,000 deaths within 14 days of getting the jab. And reportedly 25% of the people who received Remdesivir therapy died.

The other bit was new to me. A person went to his long-time doctor because his employer mandated the pseudo-vax. The doctor already had long baseline blood work on the patient, so he decided to do more tests after the man received each jab, with special attention to immune function. The doctor did a video with the details of what he found, but YouTube already pulled it. Hopefully it’ll go up on another outlet like Rumble, because I want to confirm what the write-up said.

Added: The video is now on Rumble. (Thanks, Vin.)

Reportedly, post-vax, the man demonstrated a profund drop in leukocyes, meaning he’s now immunocompromised. This might explain why so many pseudo-vaxxed people are getting sick.

I just called bullshit on a CBS report about a Billings hospital’s ICU unit being at 150% of capacity. (TL;DR: it isn’t out of ICU beds or ventilators.) But another item in the story grabbed my attention as well.

Frank Miller, 59, was hospitalized with COVID-19 more than two weeks ago. The unvaccinated engineer spent more than a week on a ventilator.

“I struggled with it, being on a ventilator,” he said, adding he was “scared out of my mind.”

Why was he conscious to be afraid of it? Why did he struggle with ventilation?

According to a former ICU nurse, people put on ventilators are usually sedated and given a paralytic so 1) they are not conscious and 2) cannot struggle and fight the ventilator. Gnerally, the ones who don’t need sedation and the paralytic are the ones dying anyway; they’re just waiting on brain death. Most often, they are being kept “alive” (for some values of the word) by families who can’t give up hope, or the body is being kept alive for potential organ harvesting.

There’s something very, very wrong about a man conscious and fighting the vent. Almost… as if he didn’t need ventilation. Almost… as if the hospital ventilated him because they get a bonus from CMS.

Almost… as if it were greed, not medical necessity.

Oh my. Montana sure is in trouble. Maybe.

Um… 150% of capacity would be more beds in use than they have, not “getting short on beds.”

How short is that Billings clinic? I’m glad you asked. This short: 3 beds open, as of 9/27. 37 ICU patients, half of which are not COVID. Statewide, 20% of ICU beds are available

Ventilators? 43 ventilated, only 9 of which are COVID patients. Statewide, 77% of ventilators are available.

Now, about the case surge. Yes, there was one. It peaked 3 weeks ago. That peak was 163 daily cases lower than the November 2020 peak. And somehow the state, allegedly being overwhelmed by the lower peak it’s passed, survived the earlier, greater surge.

You definitely want to see Update 2 below.

Let’s pick out one little point.

FDA Hearing: Doctors and Experts Testify Government Data Demonstrates COVID Shots are Dangerous and May Kill More Than They Save
Myocarditis affected 1 in 1,000 who took the vaccine.

One in a thousand. In the United States. Globally, the annual myocarditis incidence rate is 1.5 in 100,000. The pseudo-vaxxed are 100 times more likely to experience this than the non-vaxxed.

210,700,361 Americans have received at least one dose of pseudo-vaccine. I’m having trouble locating data on how many of those were Pfizer (as opposed to Moderna and Janssenn), but from news reports Pfizer appears to be the plurality. Let’s assume half were Pfizer.

The ’76 swine flu vaccine was withdrawn after a few dozen (53, I think was the official number at the time) cases of Guillain-Barre Syndrome.

We may be in need of an extra 10,000 spare hearts for transplant in the next few years.

And rather pull the Pfizer vax, they debate over whether or not to people more of it. What; in hopes of giving myocarditis to those who missed it on the first two tries?

Update: I finally found the number of Pfizer doses administered.

Couldn’t possibly be a safety issue. 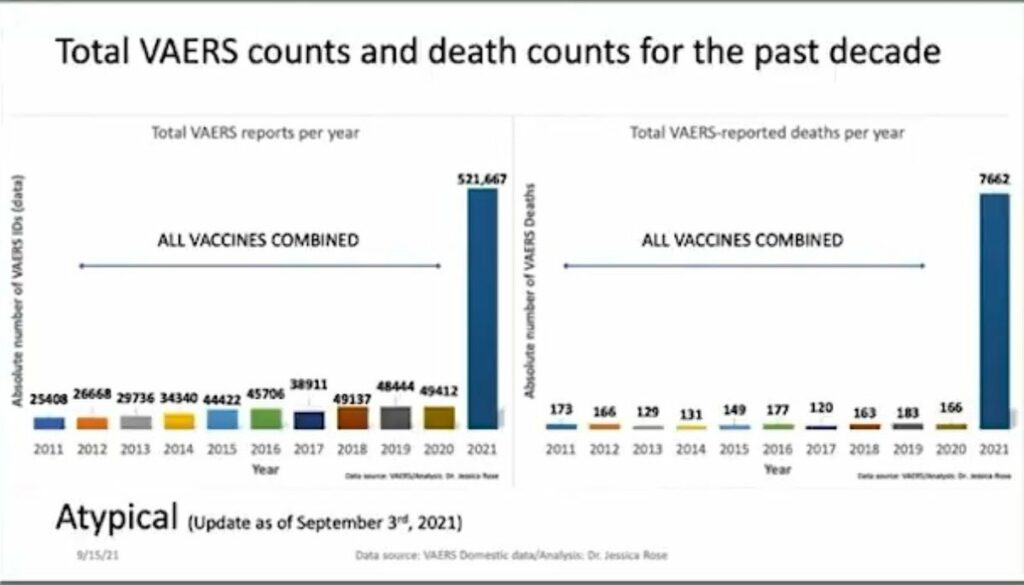