Axios Attributes Low Chinese Coronavirus Levels to Vaccines
Cases of the Chinese coronavirus are at their lowest levels since March 2020, the beginning of the pandemic, which Axios attributes to the nation’s mass vaccination effort.
[…]
Axios also claimed the U.S. “largely failed to contain the virus until the vaccines arrived.” However, Florida, for example, reopened its state months earlier than blue states, before vaccines were readily available, yet it continued to consistently report fewer new cases of the virus per capita than states such as the most pro-lockdown, pro-mask states such as New York.

Here is new cases per day, by symptom onset or date of test. 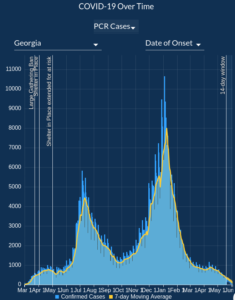 Note that Georgia peaked on January 4, 2021, and has been droping like a rock ever since. Is mass “vaccination” responsible?

No. Georgia began rolling out the first “vax” — Pfizer — mid-December, 2021, but it was restricted to medical personnel. It wasn’t available to the general public — and then only limited high-risk people — until mid-January when new cases were already in freefall.

“Vaccinations” slowly ramped up and finally peaked on March 25, nearly three months into the new cases powerdive. “Vaccinations” tapered off after that, as new cases continued to drop like a flamed-out F-4.  In fact, in my public health district, they began closing the mass-vax sites… because no one was coming in to get jabbed.

Unless you posit that that nearly all Georgia ChinCOVID cases are attributable to superspreader medical personnel, “vaccinations” were not responsible for the case drop.