A month ago, I took note of the increase in so-called “breakthrough” COVID cases among the pseudo-vaccinated. I also noticed that in Georgia around half of the “cases” being reported were “antigen cases.” That set my mind to buzzing.

To recap: An antigen test checks for antigens; in the case of SARS-CoV-2, spike proteins.

The three SAS-CoV-2 pseudo-vaccines allowed in the US are not true vaccines (a small sample of a pathogen, not enough to make one ill, but sufficient for the immune system to see and produce antibodies for). These pseudo-vax use mRNA (Pfizer, Moderna) or DNA (Janssen) to hijack cell ribosomes to produce a SARS-CoV-2 spike protein, which at last the immune system targets as in conventional vaccines.

Do you see the possible issue? Will getting pseudo-vaxxed cause you to pop positive on an antigen test? Could increasing vaccinations acccount for some of those alleged breakthrough cases?

Hypothesis: The recent surge in cases was led by a surge in vaccinations by 10-28 days. Much of the case surge is actually increased vaccination.

And here is where we stand today. 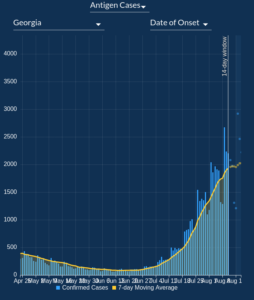 Unlike the previous instances of possible correlation, there’s no clearcut surge and decline in either antigen cases or vaccination. Both continued to increase. But, the current increase in vaccinations began July 5, 2021.

Hypothesis not proven. But darned if I think it’s disproven either.