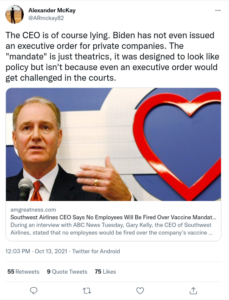 The CEO is of course lying. Biden has not even issued an executive order for private companies. The “mandate” is just theatrics, it was designed to look like policy but isn’t because even an executive order would get challenged in the courts.

Not exactly… and it’s complicated. I’m pretty sure this person is talking about the announcement Biden made about mandating companies with 100+ employees require everyone to get pseudo-vaxed. It’s true that no such executive order has been issued.

But this one, dated September 9, 2021, has; and it is the one that the Southwest CEO has been invoking. This one applies to federal contractors, which Southwest is (mail, and likely other stuff).

This order promotes economy and efficiency in Federal procurement by ensuring that the parties that contract with the Federal Government provide adequate COVID-19 safeguards to their workers performing on or in connection with a Federal Government contract or contract-like instrument as described in section 5(a) of this order.

And how does the order enforce that? Here’s where it’s tricky, and the Southwest CEO is either an asshole or a liar.

(a) Executive departments and agencies, including independent establishments subject to the Federal Property and Administrative Services Act, 40 U.S.C. 102(4)(A) (agencies), shall, to the extent permitted by law, ensure that contracts and contract-like instruments (as described in section 5(a) of this order) include a clause that the contractor and any subcontractors (at any tier) shall incorporate into lower-tier subcontracts.

In the case of Southwest, either Southwest voluntarily renegotiated their contract and allowed the clause to be added (making the CEO an asshole putting his employees’ lives on the line), or it did not renegotiate. The clause would not be there, the mandates for employee jabs is nonexistent, and the CEO is a liar claiming the mandate exists and blaming the feds to deflect criticism and lawsuits.

Southwest can make this a condition of employment on its own, especially in right-to-work states, but then Southwest would be on the hook for any pseudo-vax adverse effects. That is what I think the CEO is trying to hide.