You probably heard about it. He removed from office the Hillsborough County state attorney who went so far as to put in public writing his refusal to enforce at least three Florida state laws. He was basically removed for nonfeasance; refusal to do his job. 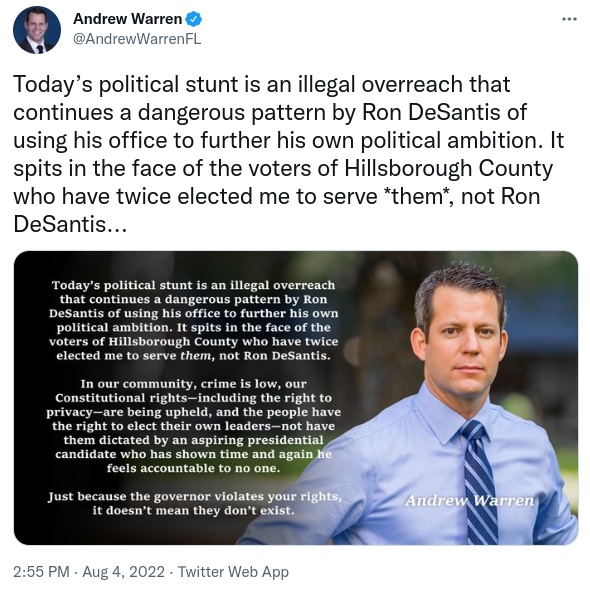 Today’s political stunt is an illegal overreach that continues a dangerous pattern by Ron DeSantis of using his office to further his own political ambition. It spits in the face of the voters of Hillsborough County who have twice elected me to serve *them*, not Ron DeSantis…

Illegal? So not only does the Soros-back shyster not do his job, but he’s incompetent, which I view as yet another valid reason to remove him for the office.

I’m not a Florida resident, but it me nearly 90 seconds to find Florida Constitution, Article 4, Section 7.

(a) By executive order stating the grounds and filed with the custodian of state records, the governor may suspend from office any state officer not subject to impeachment, any officer of the militia not in the active service of the United States, or any county officer, for malfeasance, misfeasance, neglect of duty, drunkenness, incompetence, permanent inability to perform official duties, or commission of a felony, and may fill the office by appointment for the period of suspension. The suspended officer may at any time before removal be reinstated by the governor.

Hilariously, DeSantis reportedly sent cops to “escort” Warren out, ensuring that he took only personal possessions, and not a scrap of official paper, documents, storage drives… Nada.