“MAGA forces are determined to take this country backwards, backwards to an America where there is no right to choose, no right to privacy, no right to contraception, no right to marry who you love.
[…]
“They promote authoritarian leaders and they fanned the flames of political violence that are a threat to our personal rights, to the pursuit of justice, the rule of law, the very soul of this country. 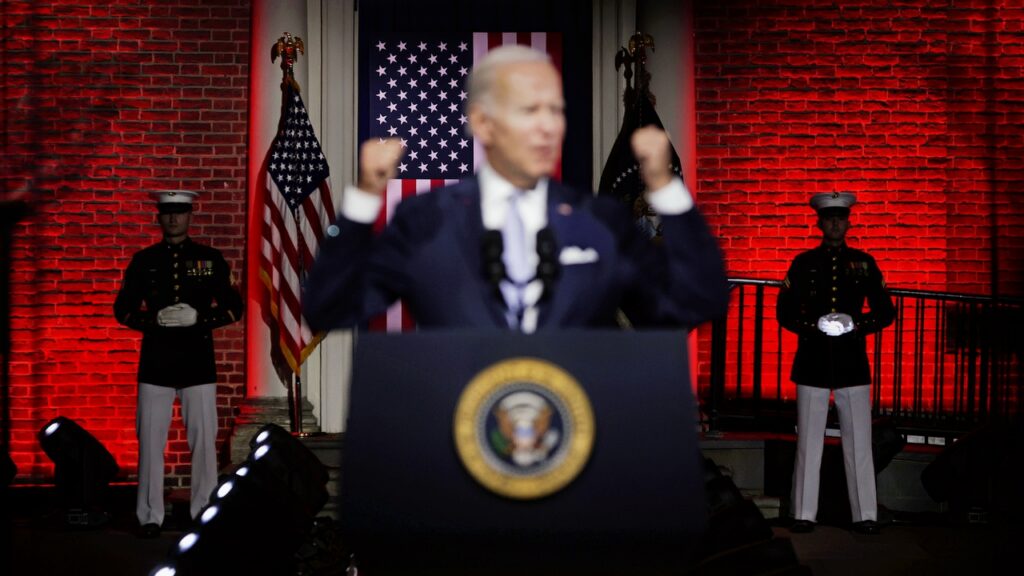 Can anyone recall another Presidential speech in modern history with uniformed military standing behind the President on stage? Not just Marines in the background on the White House lawn, because Marine One is waiting. Not military members on stage because the military is being recognized. But armed soldiers as a threatening backdrop to a threatening partisan speech.

“They see their MAGA failure to stop a peaceful transfer of power after the 2020 election as preparation for the 2022 and 2024 elections.
[…]
“This time, they’re determined to succeed in thwarting the will of the people.

If January Sixth had been an attempt to stop the peaceful transfer of power, the Capitol would a smoking hole in the ground. The greatest alleged “threat” wouldn’t have been a mentally ill dude in a buffalo hat.

“While the threat to American democracy is real, I want to say as clearly as we can: We are not powerless in the face of these threats. We are not bystanders in this ongoing attack on democracy.

“There are far more Americans, from every background and belief, who reject extreme MAGA ideology than those who accept it. It is within our power. Folks, it’s in our hands, yours and mine, to stop the assault on American democracy.

That is a violent call to arms, coming to you direct from the Presidency. And this time, the White House won’t be issuing “corrections,” or claiming Biden didn’t speak for the administration; they preemptively endorsed Biden’s declaration of war on America.

Didn’t vote for Trump (or even like me, oppose much of what he did); think you’re safe?

“When you are not with where a majority of Americans are, then you know, that is extreme. “That is an extreme way of thinking.”
— White House press secretary Karine Jean-Pierre, in the lead-up to Biden’s speech.

Who are the fascists again?

A system of government marked by centralization of authority under a dictator, a capitalist economy subject to stringent governmental controls, violent suppression of the opposition, and typically a policy of belligerent nationalism and racism.

Socialism, in other words.

A president declaring his opponents and critics the enemy, and calling for action against them.

A president issuing dikats on everything from involuntary medical treatment, mutilation of children against the parents’ wishes, and a planned economy.

A planned economy in which the president decides who can buy what kinds of energy, how much, and how the industry is allowed to provide it.

An economy in which the government tries to dictate what kind of car you can have… if you’re allowed to have a car.

The biggest difference I can see from Fascism v1.0 is that, unlike Biden’s version, Mussolini was at least credited with making the trains run on time.

A president — and his administration — calling for the oppression of what they consider a minority.

Prepare. Be on guard. We just passed the cliff’s edge.