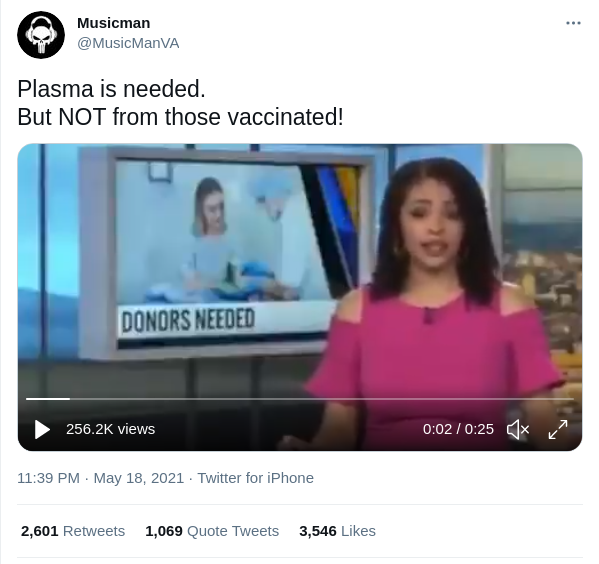 “The Red Cross said that anyone who has received their vaccine cannot donate convalescent plasma to help other COVID-19 patients in hospitals. That plasma is made up of antibodies from people who have recovered from the virus, but that vaccine wiped out those antibodies, making the convalescent plasma ineffective in treating other COVID-19 patients.”

“vaccine wiped out those antibodies”

A vaccine is supposed to prompt the production of antibodies, not destroy them.

This is 1) mainstream “news,” so the reporting is dubious; 2) local television news, which means they could be reporting the exact opposite of what the Red Cross actually said. I’ll have to do a search or two.

The Red Cross page on convalescent plasma doesn’t say anything about vaccination one way or the other.

If the Red Cross is rejecting those who’ve had the pseudo-vaccines, my guess is that issue isn’t lack of antibodies, but the blood clotting problem induced by the spike proteins the jabs cause the body to generate.

Added: Everything I’ve found claiming the RC is not accepting the jabbed for blood or plasma donation links to this one video. Note that the video displays no station identifier. No one says where the report came from, or when it allegedly aired.

The RC specifically says they will accept blood donations from the jabbed, if it’s been two weeks since the jab, and they’re symptom-free. Since whole blood includes plasma (duh), I’m pretty dubious of this unsourced “report.”