He demands everyone go vote Republican in the Georgia run-offs.

Not Voting For The Republican Senate Candidates In Georgia Is Stupid
If you are boycott-curious, let me be clear: I don’t care if you are frustrated or upset. Not at all. Grow up. Man up. And win this run-off outside the margin of fraud.

Yeah. “And win this run-off outside the margin of fraud.”

He apparently has no fucking clue what happened. Let me put it in simple terms for the moron:

You can’t beat the margin of fraud, when the margin is generated after you’ve voted, dumbass.

You can’t beat the margin of fraud when the election officials won’t even look at the fraud.

They won’t look at the fraud because the Secretary of State helped them do it be agreeing to violate state election laws.

The Secretary of State is actively trying to prevent anyone else from looking at the fraud by telling all counties to wipe their machines.

Fuck you, Schichter. I’m not boycotting the run-offs to ” punish the Democrats”.” I’m not voting because it’s fucking pointless.

That was Georgia’s Secretary of State Raffensperger. Well, you can’t really see what you refuse to look at.

Back in my Air Force days, I was a telecom tech. A great deal of my time was spent proactively looking for problems, and fixing them before the impact became noticeable; what we called preventive maintenance inspections. We didn’t wait for alarms to go off. And when they did go off, the response was to find what caused it, and fix it.

Raffensperger signed a consent decree with the Dimwit Party agreeing to violate state election laws. Those violations were a large part of what enabled mass dumps of mystery ballots and improper mail-in ballots.

If Raffensperger was an Air Force tech, he’d wander around the radio site disabling all the station alarms, and blow off maintenance.

Come to think of it, there was a tech in Greece who did just that back in the ’80s. He was relieved of duty and, as I heard it, thrown out of the Air Force, when his antics caused the site to go off the air (a bad thing, since that basically comm-isolated an entire Air Base).

I’ve maintained for months that ChinCOVID was in the US far earlier than the official general “wisdom,” and that the call for social distancing et al came far too late to doing any good.

We know from testing that people across the country had already developed ChinCOVID-specific antibodies by March, 2020.

Then the CDC decided that it was in the US by late January. But antibody testing in Ohio had already shown positives in in early January. And when they went back to check on a Washington state woman who had been hospitalized with what they retroactively recognized as ChinCOVID-type symptoms… Yep, positive for SARS-CoV-2 type antibodies. And that had to be community spread because she hadn’t traveled.

And now we have this:

Does This Study Shift the Covid-19 Narrative About When the Virus Was in the US?
“This study aimed to determine when the virus might have first appeared in the United States by using archived samples from routine blood donations collected by the Red Cross. The non-identifiable blood samples used in the study—from donors in nine states between Dec. 13, 2019 and Jan. 17, 2020.”

In the study of the blood samples, Covid-19 antibodies were detected in 84 donors on the west coast from Washington, Oregon, and California as early as December 13. Other samples were from donations made between late December to mid-January from six other states showing the antibodies — Iowa, Connecticut, Massachusetts, Rhode Island, and Wisconsin. The key aspect is these were not showing positive viral activity but the presence of the anti-SARS CoV-2 antibodies, the virus causing Covid-19.

Seven to fourteen days to develop antibodies means these “cases” dated to no later than early December. And probably much earlier, if the people were at all symptomatic, because last time I donated, they wouldn’t accept blood from someone who was sick. But I’m no longer eligible to donate blood, so maybe that changed.

And please note the geographical distribution of those people: coast to coast. By December, ChinCOVID was everywhere. Very likely anyone who was sick was simply diagnosed as a cold or flu.

The Voter Integrity Project: Findings and Conclusions is a video reporting the results of a massive analysis of absentee voting; they compared absentee balloting to Change Of Address records and out-of-state voter registration. They found more than enough invalid votes to wipe out Biden’s margin. But…

Morbidly amusing is the “Georgia and Pennsylvania Invalid Residential Addresses” analysis at the 29:14 mark. 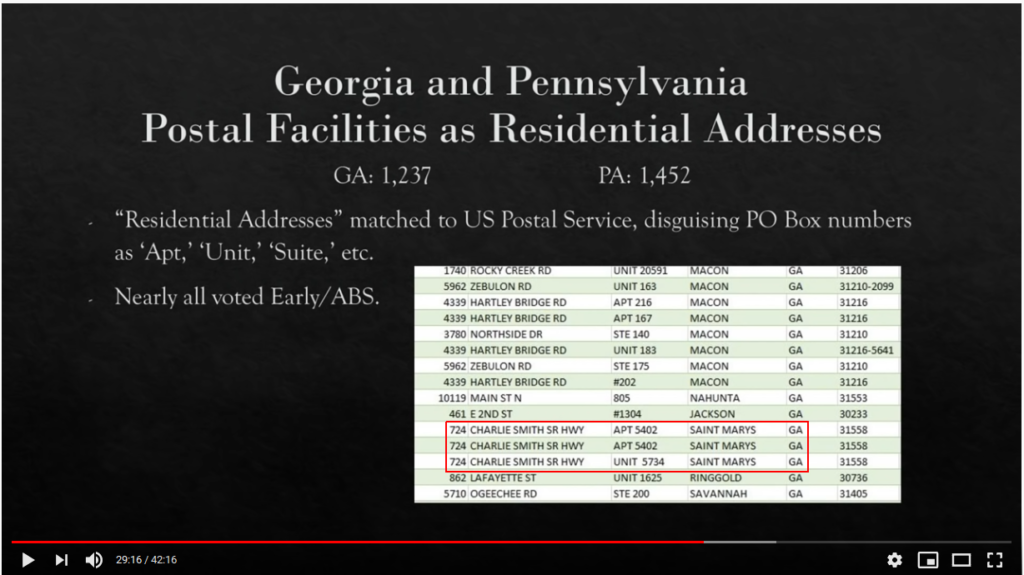 Those are in my little town. Those “residential” addresses are our Post Office.

Thousands of mink culled over COVID fears rise from a mass grave in Denmark
A rushed cull of Denmark’s mink over concerns about a coronavirus mutation has left the country facing a new horror, as cadavers of the animals re-emerge from the earth.

Collect your winnings while you still can.

Do I have any active duty military readers?

Attorney Lin Wood is looking for someone who cast a Military Absentee Ballot in Georgia. You can reach him at lwood@fightback.law.

ANOTHER FUN FRAUD FACT: All 900 Military Ballots in Fulton County, Georgia Went to Sleepy Joe Biden — NOT A CHANCE IN HELL!

OK, my active service time was quite a while back, but this seems pretty danged unlikely. 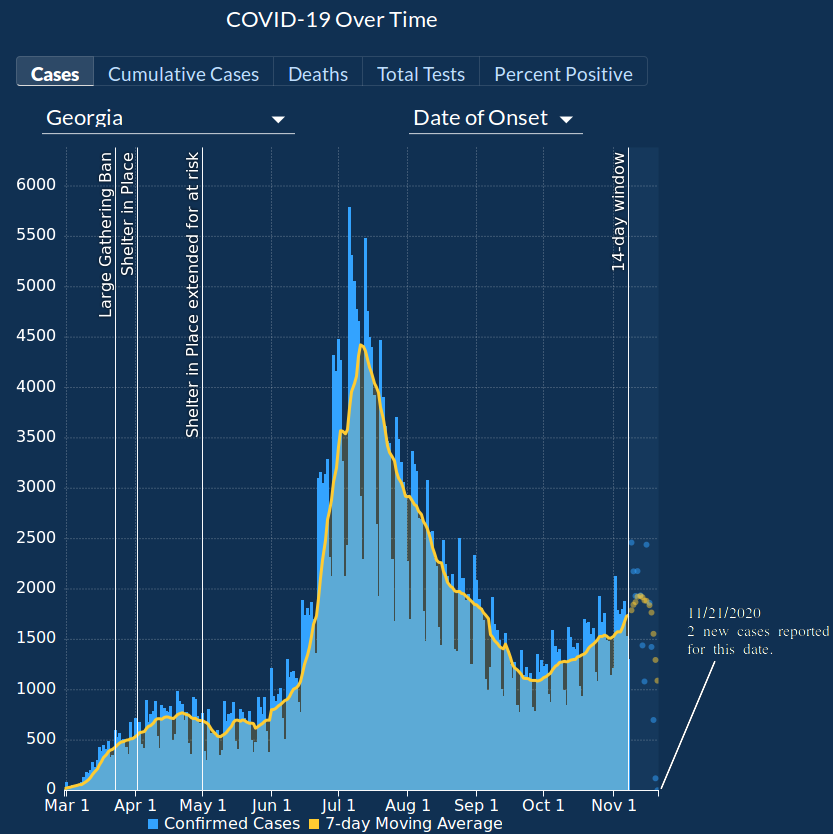 And those 37 deaths Johns Hopkins claims?

GA DPH says… 0. Zero. Nada. None. Zilch. Granted, that’s preliminary and some deaths for that day might be reported in the future; but where does JH get off inventing unreported deaths? And inflating daily new cases by 3100X?

Did Dominion move into the pandemic market, too?

Tom is a clerk, earning $10 an hour. He fills out a time sheet showing 8 hours per day, Monday through Friday, and turns it in to his boss at the end of the day Friday.

A week later, he receives the check for that period. He looks at it and realizes his boss has paid him for 40 regular hours, a total of $400 before taxes.

“Hey, boss! My check is wrong. You under paid me.”

“What? Let me see that.” His boss examines the check and statement. “Looks right to me 40 hours at ten bucks an hour.”

“No, Tom; you worked 8 hours on Friday. Certainly not more hours than there are in a day.”

“But I reported them on Friday. So that’s when they should be counted.”

His boss sighs in exasperation. “Tell me again where you worked before here.”

Yeah, Johns Hopkins is like that; lumping all the reported ChinCOVID cases from different days — sometimes different months — together as if they all happened the day they were reported.

Georgia on the other hand gives preliminary counts (preliminary, because it takes a while — sometimes months — for reports to come in) of 1 new case and 0 deaths on 11/19.

Interestingly, JH’s cases number doesn’t even match the Georgia Date of Report number: 2,375 (and one of those occurred July 6). Somehow, JH found an extra 689 that Georgia doesn’t know about.

Perhaps I should change the name to Tom Hopkins.

(Yes, I know I’ve been over this quite a bit before. But a few folks seem to have difficulty grasping why the difference between date of onset and date of report matters. I thought the little parable would help the short bus set get the idea.)

I’ve spent days reading hundreds of pages of sworn-under-oath affidavits attesting to election irregularities on a massive scale. Irregularities ranging from dumbass mistakes, to gross incompetence, to outright fraud. These affidavits are eyewitness testimony of voters, observers, and election workers. The affidavits include photographs and spreadsheets. They include analysis by a professional statistician.

I have seen grand jury indictments on murder charges on much less — and flimsier — evidence. I have seen murder convictions on less evidence than these affidavits.

But Georgia’s governor and secretary of state say there’s nothing to see, no big deal, nothing to even look into. Hell, Raffensperger is more than fine with it: he helped it happen by signing a consent decree agreeing to violate state election law.

Election certified. Including what an — this one is still anonymous, but I’m hoping he/she will come forward under oath, too — says is 6,000 more votes in Cobb County than Cobb County voters. Including what yet another whistleblower says are simple regurgitated original counts, not the recount numbers, allegedly at state direction.

I have zero confidence that any ballot I cast will bear any resemblance to how it’s counted.

Gov. Kemp and SOS Raffensperger say they don’t give a shit whether I trust the election system. Because the voters don’t matter.

It doesn’t matter if you were a Democrat voter who wanted Biden; your vote didn’t count; you just happened to support the candidate the system pre-chose for you.

Whatever party or candidate you wanted, if you “voted” — be it by mail or in person — you didn’t really vote; you inadvertently participated in s show for the cameras in a Potemkin election.

But Raffensperger sees no need to do anything to discourage — or arrest — them.

That Constitution we used to have said states were required to provide a republican form of government. That is one in which the actual real people cast actual real ballots that actually get counted, in order to elect our choice of representatives to legislate for us.

That choice is no longer ours. The republic is dead.

And Kemp and Raffensperger are fine with that.

Georgia certifies then decertifies recount results
The Georgia Secretary of State issued a correction Friday afternoon, saying this state is still completing the certification process, despite an earlier announcement that the state had certified an electoral victory for Joe Biden.

How the hell do you accidentally certify an election when you haven’t finished yet?

All this just gives me warm fuzzy feelings about the reliability and integrity of the Georgia election system. (For the intellectually challenged idiots and other Democrats, that’s sarcasm.)

That’s utter bullshit. Here is the horrible Houston epidemic they have to get under control. 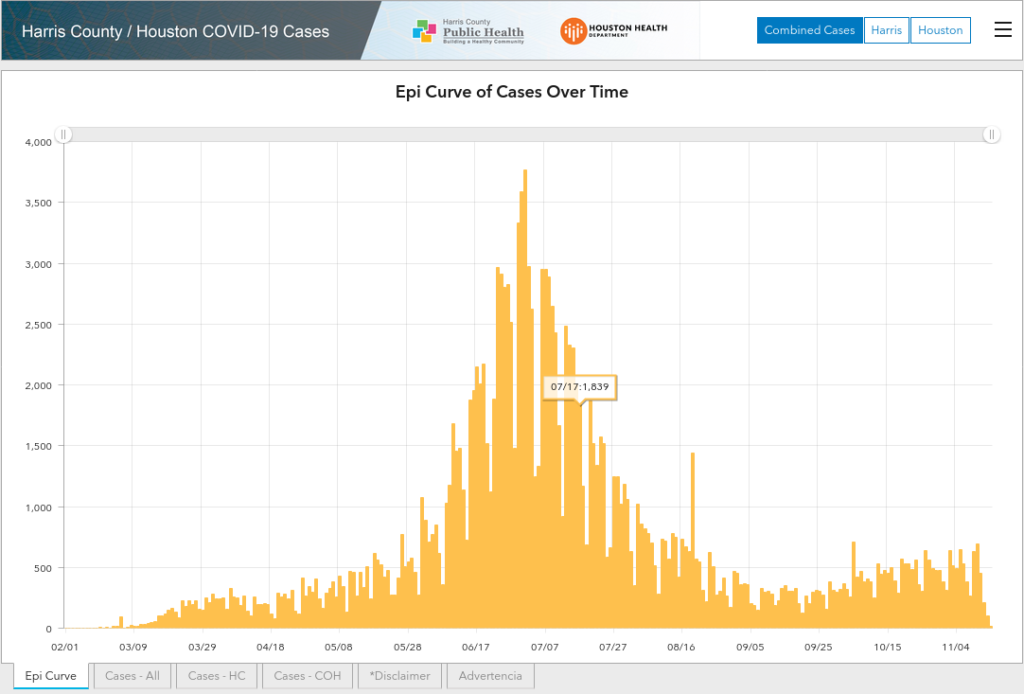 There might have been some rationale for door-to-door questioning and blood sampling… back in June — 3,767 cases — when ChinCOVID was still increasing. The area peaked on July 1, and has been trending downward since. They’re latest micro-peak was a week ago at 694 cases.

That chart looks so much like Georgia’s that I’d be willing to bet that the recent bump in cases correlates to a bump in testing, which is what happened in Georgia.

I would not participate in that. But if I did, I’d make them draw the blood and ask their questions outside. Do not let snoopy folks from the government into your house. If it’s too dirty for someone’s taste, you could find yourself reported the DCF. If a victim disarmament freak on the team saw a gun, or indications of a gun like a safe or ammunition, they might drop a dime on a call to the cops.

As for the blood itself, be aware that those samples get saved and reused for other research purposes. A few months ago, someone collected old blood samples from a county’s dialysis centers, and tested them for ChinCOVID. Someone might decide this was a great chance to screen for unlawful drug use in the community… and those samples aren’t going to be anonymized.

Heck, the cops could even decide this is a great chance to enlarge their DNA database.

ETA: Tell ya what; here’s the conditions under which I would participate: