Meet Ramón Colón-López, the Senior Enlisted Advisor to the Chairman of the Joint Chiefs of Staff.

“This is coming from every echelon that we’re talking to,” said Ramón Colón-López, the Senior Enlisted Advisor to the Chairman of the Joint Chiefs of Staff. “Some people may think that, ‘all right, so the events of 6 January happened. How come you’re not looking at the situation that was going on in Seattle prior to that?’”

The military has started a Defense Department-wide effort to educate service members on what constitutes extremist behavior and why it is impermissible in the armed forces.
[…]
“We cannot confuse a First Amendment grievance because of social injustice organization and some of the criminals that latched on to go ahead and loot, destroy and commit other crimes. There’s two clear, distinct groups right there,” Colón-López said, referring to the difference between peaceful Black Lives Matter protesters and looters who disrupted some of those events.

The looting has been used by some television commentators to convince viewers that the protests were equivalent to the Capitol attacks and that message has left a mark on some of the younger forces, Colón-López said.

In discussing what messages the troops are getting, Colón-López was delicate in his words. But he said he reminds them all that their oath defends free speech, and he encourages the younger service members to look into issues beyond what they see on TV.

Sometimes the younger troops take what they see on TV as, “OK so that’s what this means,” Colón-López said. “We have to educate them, no, that’s not what that meant.”

I got out shortly after returning from Desert Storm. I’d put in just over eleven years, and some people wondered why I’d do that when I was more than halfway to retirement. I had many reasons, but I saw shit like this coming: “Social Actions” was engaged in serious left-wing cultural engineering of USAF.

Per this fucking socialist stooge:

Fuck it. I could go on for days, but there’s no point because Colón-López lives in a different “reality” where left-wing violence is good, and conservatives are bad even if they didn’t do anything bad.

While I was in, I saw the Social Actions Engineering people destroying careers and drving people like me out. Then, as a civilian, I watched the Obama administration spend eight years purging the officer corps and senior enlisted of wrong-thinking Constitutionalists. All in favor of kumbaya-singing (pardon me; I’m in the middle of Ringo’s The Last Centurion) socialists/internationalists. Like Colón-López.

Petitioning Congress to uphold the Constitution and the rule of law is evil “extremism”.

I’m seeing a lot of headlines about the Atlanta-area massage parlor shootings. Mainstream reporting is all Hate Crime! Racist! White supremicist! because the shooter is white and some of his victims were were asian. Never mind that the police say he confessed and gave his motive: sex-addict trying to cut back by eliminating sex sources. Racist? No, but maybe sexist.

But the all the claims that it must be racially motivated be of course whites are inherently racist prompted a morbidly amusing thought.

Forget temporary insanity. Plead not my fault because whites are inherently — genetically, ya know — racist, and I can’t help it.. The white defendant can bring in a Critical Race Theorist to explain to the jury that of course he’s uncontrollably racist. And the attorney moves for dismissal or a not guilty ruling.

I don’t see this as the case, but I want to see this happen, just to watch CRT nutjobs’ heads explode as some white guy embraces their ideas to his benefit. (Not that I’m saying the defense would actually work; just that trying it would drive CRTs even more crazy.)

See anything odd about this? 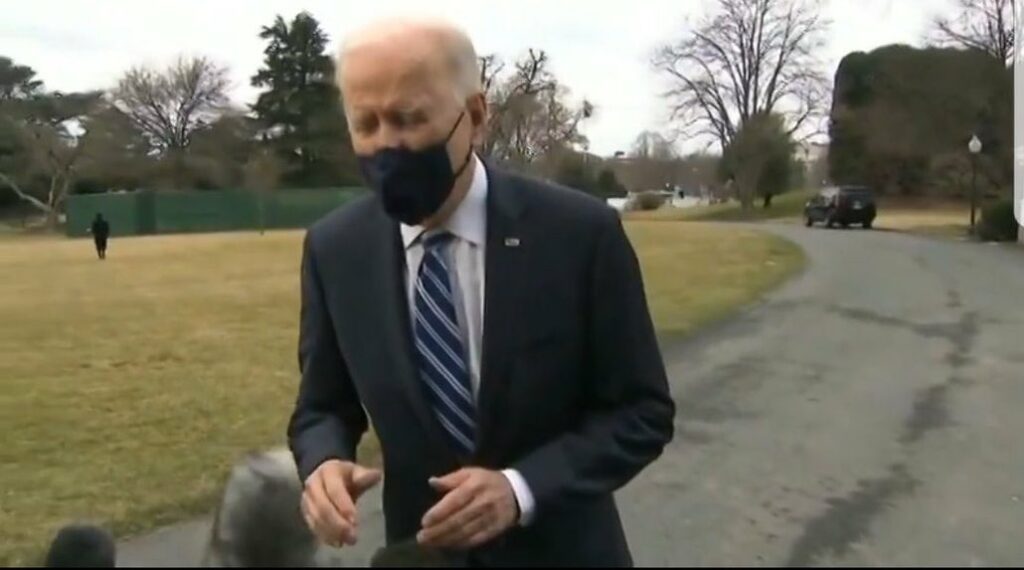 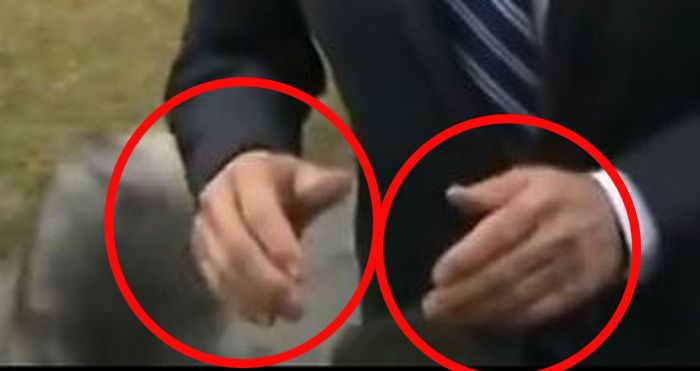 That sure looks to me like his hands are superimposed in front of those mikes.

Update: Here’s a video clip of it. Tell me that isn’t green screened.

…with a side of Glocks.

I’m sure he was running background checks.

The weapon of choice of gangbangers everywhere. 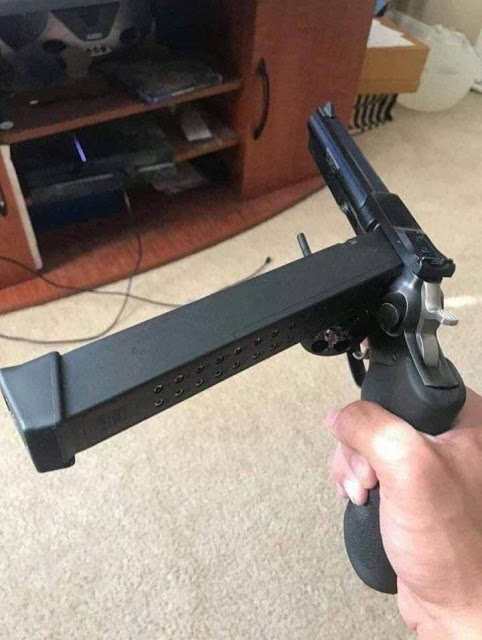 Rumor has it Congresscritter Carolyn B. Maloney [D-NY] is already drafting a bill to ban them. 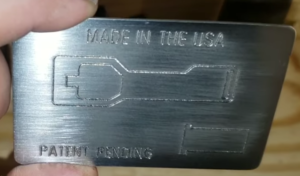 I hope you have heard about the arrest of Kristopher Ervin for selling what the ATF alleges are “lightning links,” machinegun conversion devices for AR-pattern firearms.

Let’s run down the specifics of the claim.

A “lightning link” of the sort the ATF alleges that Ervin possessed and sold is an assembly of two pieces of metal. Are the two separate pieces of material a lightning link if they aren’t assembled?

What if you have a picture of a lightning link etched on metal (the AutoKeyCard)? It not only isn’t assembled, it isn’t even two pieces of metal shaped for assembly? It’s a… template. Is the picture on metal a lightning link? The ATF says it is.

But what if you have a computer image — JPEG, PNG, whatever — of a lightning link? You could print that out, and make a lightning as above. Are you in possession of an unregistered machinegun part yet? You think not?

Do a web search on “Lasnik Defense Distributed.” The Dishonorable Lasnik blocked the release of computer files — templates — because they could be used to make gun parts.

Templates are just instructions. But instructions can be verbal. What if you have this — on paper, on your computer

I’ll stop there lest I generate instructions, a verbal template, that the ATF will mistake for a lightning link.

At most, Ervin’s AutoKeyCard is handy instructions for how to make a lightning link. The ATF says that’s close enough for government work.

The AutoKeyCard isn’t even complete instructions. Note that dimensional data is left out completely. It’s just enough that you can do it, without really knowing how. 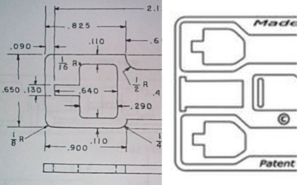 One reporter I communicated with agreed with the ATF, that the picture — the template, the instructions — is the thing. Even incomplete.

Now, let’s say you don’t have those instructions on file, but you read a PDF about lightning links once…

…and you remember enough to make one. At what point in the process from concept to working material object is the lightning link real? We know the ATF claims it’s somewhere before there’s a working object.

That aforementioned reporter is a fool. He doesn’t know enough about law and judicial precedent to see the broader implications of the ATF’s argument that instructions are close enough.

Pretend you’re a reporter, making a living on your First Amendment free speech rights to tell people what’s happening in their community. Suppose there has been a series of homicides, and you want to warn people about the danger. Maybe you read the police reports and wrote this:

Police say the killer hides in the shadows of dark alleys. Witness statements say the suspect wears dark clothes, possibly to be less easily seen. He waits for a lone individual and , per surveillance video, strikes silently from behind, slashing the victim’s throat. Forensic psychologist Dr. Jane Smith says the suspect chooses smaller, weaker targets, usually women, because they are more helpless.

Police say that people, especially women, should avoid dark spaces at night, and always travel in pairs or groups. Be aware of your surroundings at all times.

Good job! You told the people to be cautious, why they should cautious, and what to watch out for. Give that guy a Pulitzer!

The problem is, by ATF standards, you described how a crime is committed. You gave other wannabe serial killers instructions, a how-to. A template for murder. According to the ATF and that ignorantly supportive reporter, you committed murder. The Concept, the instructions are the thing.

Ervin provided instructions on how to make an unregistered machinegun part.

Our hypothetical reporter gave instructions on how to commit a murder right down to where to hunt, what to wear, selection of silent weapon, and how to pick victims.

Some MSNBC host wants to rename the FBI’s J. Edgar Hoover building, because he was a corrupt racist (and from my reading, I’d guess he was both, even by the “cultural norms” of his own times). The ditz wants to name it for…

When the government declares that it’s anti-government to support and defend the Constitution, you no longer have a constitutional republican form of government.

For those who weren’t paying attention, the Republic failed the first time we let a judge invent levels of scrutiny never mentioned in the Constitution, to rationalize violating enumerated rights because the government claims to have a “good reason.”

Over at Gateway Pundit…

Biden Takes Swipe at Sarah Palin in His Prepared Remarks By Repeating Lie That She Could See Russia From Her House
Sarah Palin told the liberal media that it is possible to see Russia from the outer Alaskan Islands. The media then used this to smear the popular governor. And now Joe Biden is pretending Sarah Palin herself was looking at Russia from Alaska — something she never said.

And this nasty swipe was written into his prepared remarks because Joe Biden does not have the mental capacity to come up with this snarky lie by himself.

The lie that Biden was referring to was instigated in a skit at far-left Saturday Night Live in 2008:

That reminded me of something related. I don’t recall who it was, and I think it was at my long-retired bussjaeger.org site. But someone was insisting that Palin had actually said she could see Russia from her house. As “proof,” that person gave a link to a clip of the SNL skit.

After that, I started recognizing some of the Palin criticism as being based on Tina Fey’s impressions. These idiots apparently thought that was the real Palin, and the clips they found were from news reports. And they vote.