Those protesters at SCOTUS Justice Alito’s home? Not to worry. VA Gov. Youngkin is on the job. 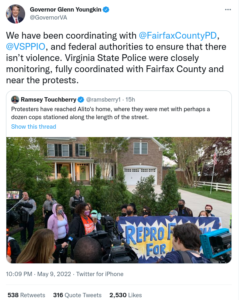 We have been coordinating with @FairfaxCountyPD, @VSPPIO, and federal authorities to ensure that there isn’t violence. Virginia State Police were closely monitoring, fully coordinated with Fairfax County and near the protests.

Since you’re only going to monitor the attempted intimidation of a Supreme Court Justice, something that violates both federal and state law, I was just wondering…

Is there a dollar threshold at below which you’ll merely “monitor” bank robberies?

Asking for a friend.