When is appointed “transwoman” “Rachel” Levine* as Assistant Secretary for Health (Health? a mentally ill person in charge of health?), omne might have blown that off as opportunism; throwing a bone to the — tiny — tranny demographic.

But with serial liar/disinformationist Nina Jankowic heading the new Ministry of Truth, I think it’s pretty damned clear that crazy is the primary qualification they’re looking for.

Jankowicz, the radical left-winger heading up the Department of Homeland Security’s Disinformation Governance Board, or “Ministry of Truth,” was apparently a huge Harry Potter fan — enough to create a band with her friend Lauren Fairweather in the 2000s. According to Spotify, the albums came out in 2007 and 2008, meaning Jankowicz was presumably 18 when the first album dropped.

Maybe I’m wrong. Maybe the administration is trying to attract the votes of teachers unions heavily infested with groomers and outright pedophiles. If the elections are clean this time, the Dims need every votes they can scrape up for the midterms.

* Does anyone know if “she” legally changed its name? I’ve done some searches and can’t find anything.

Just saw a hawk try to take an egret in flight.

Kinda funny. That egret was about three times the size of the hawk.

My sister got some junk mail. It’s pushing a Medicare Supplement Comparison Schedule. All you do is fill out their form and send it back postage paid.

They want name, address, birthdate, phone number, email address, spouse’s name and birthdate, and your current insurance company name (if you already have a supplement plan).

I don’t know if “Information Service Center” is an outright identity theft scammer working on the cheap (envelopes cost money, you know), or if it’s semi-legit but completely effin’ clueless about privacy.

I wonder how many suckers actually fill these out and stick ’em in the mail.

So I guess I am old. 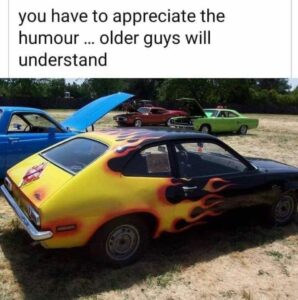 For those too young to recall.

…and the cop just took him home to daddy, without arrest or charges; and daddy was outraged that the cop “abused” his little angel?

I referred to the kid as a “little repeat offender>”

Days after viral video with Syracuse police, 8-year-old accused in theft of bike
The eight-year-old child involved in a now-viral video involving Syracuse police has been issued an appearance ticket for stealing another child’s bike, less than a week after his interaction with police was seen across the nation.

Syracuse police confirmed the incident happened Thursday evening just before 7 on Grumbach Avenue in Syracuse. Police tell us he was given a juvenile appearance ticket for petit larceny.

They’re still letting me off easy.

The woman who filed the complaint in Thursday evening’s case told police her child was pushed off his bike.

I’d have tacked on a misdemeanor assault charge as well.

For some reason, I’m seeing people expressing shock that Dims expect to tax their our way out of “inflation.” Case in point:

Schumer: Let’s Face It, The Only Way to Solve Inflation is to…Raise Taxes
Question: Is the Democratic Senate Majority Leader trying to tank his party ahead of November? Inflation is raging, Americans’ purchasing power is painfully diminished, and Chuck Schumer thinks the ‘only’ way to right the ship is to, um, confiscate more earnings from Americans and American businesses? Higher taxes and increased spending are his party’s predictably knee-jerk solutions to nearly every problem, even when those policies are glaringly and cartoonishly wrong for the moment.

Duh. They’ve been pushing this idea for years. It’s the funding mode for Ocassionally-firing Cortex’ “Green New Deal.” Which, in case you failed to notice, was partially incorporated in the “American Rescue Plan,” and pretty was Biden’s original “Build Back Better.

But the feds may have screwed the pooch.

NYC subway shooting suspect gets DNA swab from FBI, defense sounds alarm
“FBI agents entered his cell at MDC Brooklyn, questioned him, took multiple buccal swabs of his DNA, and directed him to sign certain documents,” his federal defenders wrote to Judge Roanne Mann, referring to the Metropolitan Detention Center, a federal holding facility. “Contrary to standard practice the government committed this intrusion absent advance notice to counsel, depriving us of an opportunity to be heard or to be present.”

According the defense attorney, the feds entered without presenting a warrant, and without ever notifying the attorneys before or after. Only when they heard about the search and contacted the feds did they get a standalone warrant, without any affidavit to explain why it was issued.

Stupid shit like this has gotten pretty obviously guilty people off before.

I know what my essay would address.

Man Who Was Arrested For Leaving Skid Marks On Rainbow Intersection Gets Bizarre Punishment From Judge
A man who was arrested for leaving tire marks on a rainbow mural in South Florida was ordered by a judge to write a 25-page essay on the 2016 Pulse Nightclub shooting, according to The Palm Beach Post.

Lessee… radical Islamist who said he did it for Allah, had been under investigation by FBI but case closed because his father seemed to be a feddie informer, how the authorities spun it as purely anti-gay and not terrorism whatsoever nosirree…

That would be just to start. Then I could get into how this was used to vilify AR-pattern firearms, when the chumbucket didn’t even use one.

I could go on from there.

Since Musk’s buyout of Twitter was announced, a strange thing has been happening. Suddenly [conservative] people’s suspensions have been lifted, shadowbans seems to be evaporating, and post flags and warnings are disappearing.

Twitter claims it’s just a coincidence, but — to me anyway — it looks a whole lot as if Twitter weenies, realizing that Musk is going to get his hands on the data, and promises to make it open-source, well… it almost like they’re deleting evidence of what they’ve been doing.

Musk needs to get a preservation order from a court, forcing Twitter to maintain the database and all records in the condition they were in when Twitter agreed to the sale. Imagine buying a car, but when the dealer turns it over to you, the stereo has been replaced with an AM/FM/8 track, the leather seats are now vinyl, and the tires swapped for retreads.

But when I heard about people magically getting back on Twitter, I had to check. I was suspended back in September 2020, for a pro-Rittenhouse tweet. I had foolishly noted that Kyle acted in lawful self defense. Bad me. 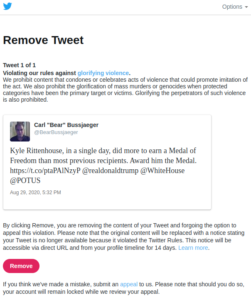 Just for the heck of it, I decided to “appeal” the suspension again. Not that I want to play there anymore, but I would like to delete the account completely, and Twitter doesn’t let me do even that while suspended.

Just wondering: Since it’s been MONTHS since I was proven correct — in a court of law, with Ritenhouse’s acquittal on ALL charges — why am I still suspended?

We’ll see. If the account disappears, it’ll be because I got unsuspended and shut it down.

Heh. In semi-related news, I tried to delete my Parler account several months ago. They had it rigged so I couldn’t do it, but swore they’d deactivate it for me.

Nope. Still there. Rumor had it that Parler does this to keep up their apparent subscriber numbers, so I expected this [wouldn’t] happen. 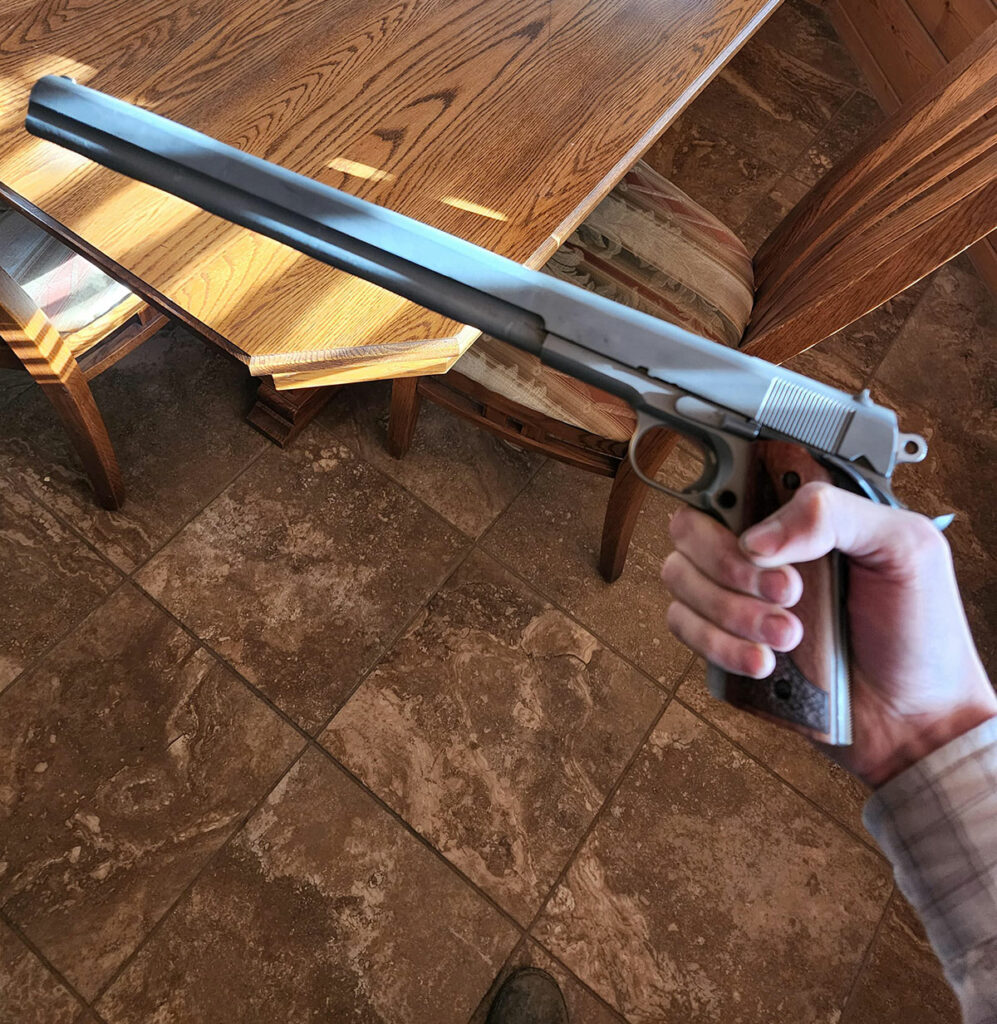 Apparently this was found on Reddit, and is real, not a photoshop. ENDO-Mike doesn’t have a Reddit link, so my real question is unanswered: With that much slide mass, will the action cycle? Or does he have to manually rack the slide for each shot?