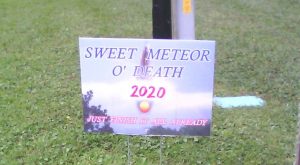 My mail carrier was amused. She said she cracked up laughing when she saw it,  took a picture, and posted it to facebook.

I had that, and some smaller signs printed up for the 2016 cycle (remember when we thought elections had jumped the shark when a credible candidate had to defend himself against claims that he didn’t stab someone?). I’ve been changing the year and putting it out every election since. In 2016, I scattered the small signs around town with other campaign signs.

Added: The Amazon driver on Tuesday was pretty amused, too.

The socialist leftists apparently. It looks like these baby totalitarians have been lurking on conspiracy boards for great ideas to implement when they come to power.

“We need a Truth and Reconciliation Commission,” Reich tweeted. “It would erase Trump’s lies, comfort those who have been harmed by his hatefulness, and name every official, politician, executive and media mogul whose greed and cowardice enabled this catastrophe.”

“DEPROGRAMMING CENTERS. These will have to be at every strip mall in every town!! They had them in Germany after Hitler, we need them just as badly!! Make it mandatory trump supporters go or they must leave our country!! I’m Fkg. Serious”
— flowerchild111>/blockquote>

Denazification concentration camps? There’s a reason they like to call everyone who disagrees with them “Nazi.” That was a bad idea then, and a worse one now.

“China, Inc.” Taking these at face value — and remember these haven’t been confirmed yet — we’re talking about unlawful influence peddling, violations of the Foreign Agent Registration Act, and apparently much, much more.

Anybody less connected would have already fled the country. But when you know the FBI will sanitize and hide the incriminating evidence for you…

Just relax and do another line, Hunter. No sweat.

Until after the election. If Trump wins, expect a special prosecutor to investigate.

If Biden wins, daddy’s puppeteers might finally find you to be embarrassing enough to consult Hillary on the best accident and suicide techniques. Or maybe it’ll be an armed robbery where nothing is stolen.

Just yesterday, writing about the Biden emails found on a hard drive by a computer tech, I said, “And this is why I do my own computer repairs.”

Last night I was watching streaming TV, and Firefox started acting up. Didn’t think too much about it, but I turned off the TV and went back to a book.

This morning, all programs started crashing. I immediately decided to start making another set of backups just in case. While doing the last part, the computer froze solid.

Spent too much time on Cheerful Charlie wishful thinking-type troubleshooting, but finally was forced to admit the hard drive was gone. It won’t work even in another computer.

What with all the backups I do routinely, and what I managed this morning, I lost almost nothing. And nothing at all critical. Restored all my data to a backup laptop, which is actually an upgrade (which is another computer scrounge and repair story in itself). And I’m back to work.

Said work being convincing TTAG that yes, I did give them seven columns last month, and yes, they did publish them, so yes, I should be paid for them. You can see them all for yourself.

Actually I sent eight, but one they held until October.

Show of hands: Is anyone surprised?

BREAKING: C-SPAN suspends political editor Steve Scully indefinitely after he lied about his Twitter being hacked
‘Out of frustration, I sent a brief tweet addressed to Anthony Scaramucci. The next morning when I saw that this tweet had created a new controversy, I falsely claimed that my Twitter account had been hacked.”

I guess someone explained to him how easy that would be to check, and he wasn’t confident Twitter would lie for him.

Frankly, I doubt he had much to worry about.

Twitter is locking users out of their accounts for sharing links to the New York Post’s story reporting emails which appear to show that Presidential candidate Gropin’ Joe Biden and his son Hunter broke federal laws to interfere in a Ukrainian criminal investigation. Locked users include the New York Post itself, and at least one government official, White House Press Secretary Kayleigh McEnany.

The New York Post reports that the material was not hacked, but was found by a computer technician on an abandoned hard drive.

The computer was dropped off at a repair shop in Biden’s home state of Delaware in April 2019, according to the store’s owner.
[…]
The customer who brought in the water-damaged MacBook Pro for repair never paid for the service or retrieved it or a hard drive on which its contents were stored, according to the shop owner, who said he tried repeatedly to contact the client.

Twitter has not offered any alternate explanation of the data origin, much less evidence that a hack was used to obtain the data, rather than simply reading a drive the shop was given.

Suppressing information, on a mass scale, on apparent wrongdoing by a Presidential candidate with the election less than three weeks away is an incredibly valuable public relations service for the Biden Campaign.

(Aside: And this is why I do my own computer repairs.)

What can I say? I attended a Catholic school, and those nuns were scary violent. And they had toned it down some by then.

The CDC released an interesting study, Community and Close Contact Exposures Associated with COVID-19 Among Symptomatic Adults ≥18 Years in 11 Outpatient Health Care Facilities — United States, July 2020. This part in particular got my attention:

So much for masks. I’m in the “rarely” category and if I got ChinCOVID, I never even noticed.

Through an interesting coincidental confluence of news reports on COVID deaths in my area, an obituary, and DPH ChinCOVID reports, I discovered an odd little detail. One of our recent deaths was in a area nursing home…

…where he was on hospice. You know: end of life care. Because he was already dying of something else.