Schumer on “ghost guns.” Holds up a picture, points to a slide, and calls it a barrel. But he’s the expert with all the answers.

He’s calling on the ATF to redefine “firearm” to include “any part as a firearm.”

No. Your move, Chuckles

It seems the NRA (delenda est) is arguing that Hunter Biden didn’t necessarity violate the law and lie and his 4473, when he claimed not to be an “unlawful user of, or addicted to, marijuana or any depressant, stimulant, narcotic drug, or any other controlled substance.”

The “unlawful user of or addicted to any controlled substance” prohibited person category is somewhat nebulous, and a person can remove themselves from that category at any time by ceasing to use drugs. Theoretically, Hunter could have been in a period of sobriety during the timeframe he purchased and possessed the revolver. Moreover, the following summary of existing law should not be taken as an endorsement of the current scope of the federal prohibited persons categories.

Bullshit. Biden bought the gun in October 2018. Was he an addict at the time?

“I have said mean and horrible things to Hallie. Ive been with woman and admitted that. Im an addict. Im loud and brash and difficult. But ‘im loyal to a fault. And so confused. Im trapped clean or dirty sober or not.”
— Hunter Biden, text message dated January 29, 2019

And other material from his abandoned laptop documents still more drug use during that span.

Yes, he broke the law. Anyone not politically connected like Hunter would be in prison.

I cross-posted a slightly bowdlerized, and updated, version of the Monroe County v. Iowa Firearms Coalition lawsuit post at The Zelman Partisans.

Updated with a statement from Iowa Firearms Coalition below.

As the suit says, Monroe County is suing IFC and a county resident. Specifically, the suit is over a Chief Justice order barring firearms from court houses, and a state law that says if you do that, you must provide security. I jumped right into the filing because I really wondered how the hell the county was going to rationalize a claim against those defendants.

And… I don’t see a claim against them.

I need someone smarter than myself to explain this to me. The obvious unofficial backstory makes it clear that the county is maliciously targeting IFC and Thompson because they warned the county to comply with the law. But the only way the court filing addresses the official defendants is this.

31. No personal judgement is sought against Mr. Thompson.

Dafuq? There’s no actionable claim. They only say that IFC warned them they should comply with the law. Thompson gets no mention beyond that he made an unspecified — in the filing — request. Neither IFC’s nor Thompson’s warning/request is included in the filing. So even this vague sorta-claim is unsupported.

Other than that, the whole thing is a claim against the state for an unfunded mandate imposed by HF 2502. But even that is bogus. There’s no mandated expenditure; all they have to do is not declare a gun-free zone. If they choose to do that, then they voluntarily accept the expense. It would like Joe Blow calling vehicle registration fees an unfunded mandate; it isn’t because no one has to pay it unless they choose to buy a car.

This reads like a case against the state, and some office intern accidentally listed the wrong defendants. And even then, the alleged unfunded mandate would have been imposed by the Chief Justice who issued the gun-free order. Including IFC and Thompson has no point — legally; unofficially, it looks like retaliation for protected speech — but to make them pay for the county’s suit against the state.

OK, smarter people; what have I missed?

“You just stated what our attorneys did as well. We have no idea what has motivated this action, but we seek to correct the injustice.”

The case may be BS, but IFC still needs to defend itself. Good attorneys are not cheap. You can help support IFC HERE.

Senator Pat Toomey (R-PA), of Manchin-Toomey background checks infamy, is at it again.

“So, I still think the best way to do this is focus on commercial sales. You know, between the sales that already occur at licensed firearm dealers, all of which require a background check, and what we consider commercial sales, advertised sales, gun shows and on the internet, that covers the vast, vast majority of all transactions. And it would be progress if we had background checks for those categories.”

commercial:
(1) occupied with or engaged in commerce or work intended for commerce a commercial artist
(2) : of or relating to commerce

I’ve seen this exact same trick tried in state level legislation. Change the definition of “commercial” from being in the business of, to you advertised it.

If you “make known” in any way — such as word of mouth — that you’re willing to sell a firearm, you “advertised” it; “commercial sale.” No matter that you aren’t in the business of…

(A)  except a licensed importer, licensed manufacturer, or licensed dealer, to engage in the business of importing, manufacturing, or dealing in firearms, or in the course of such business to ship, transport, or receive any firearm in interstate or foreign commerce;  or

Se what Toomur is really doing? You likely thought the B&S was talking “business” but meaning “private sale.” Nope. Anyone who advertises  a firearm for sale is now in the business of selling firearms…

So Cruz and other Senators went to Texas to investigate the border crisis.

WOW! CAUGHT ON VIDEO – Biden Operative Harasses, Tries to Block Sen. Ted Cruz from Filming Joe Biden’s Caged Children (VIDEO)
Last week several Republican Senators visited the US Southern border on the Rio Grande in Texas to witness the massive surge in illegal aliens and fake refugees flooding across the US border in Texas.
[…]
When Senator Cruz began filming the unimaginable and depraved conditions, a Biden operative jumped up to harass and attempt to block the Senator’s camera!

Whoever, with intent to avoid, evade, prevent, or obstruct compliance, in whole or in part, with any civil investigative demand
[…]
Shall be fined under this title, imprisoned not more than 5 years… 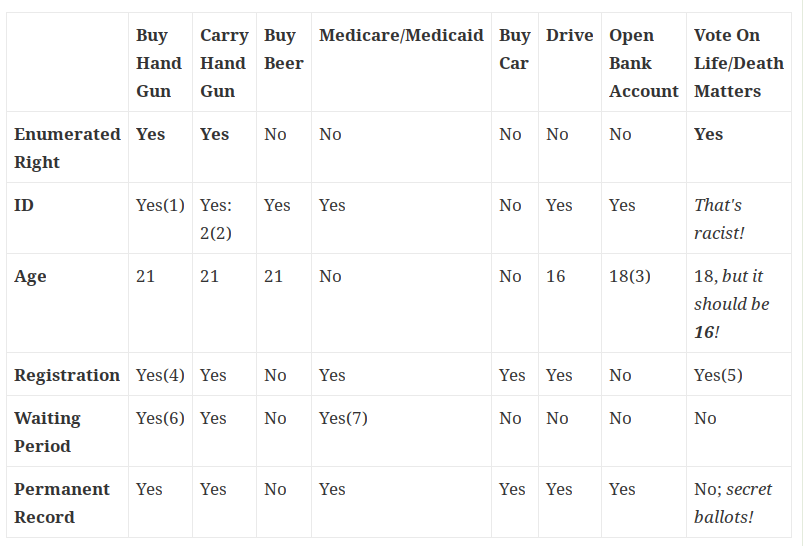 1. Often 2
2. Includes carry license
3. Minor needs parent or guardian on account
4. 4473, and separate registration in some states
5. Yes, but “It shouldn’t’ be until you walk in to vote, racist!”
6. Background check wait, plus additional days in some states
7. Paperwork processing

ATF Newspeak
The ATF is reportedly working on redefining “firearm” to include unfinished “80%” frames and receivers. And I am getting really tired of this.
[…]

I watched a few minutes. Interestingly, he started out looking alert and chipper. But after about 15 minutes, it looked like he came down from a coke high and crashed. Even with the obviously prepared list of reporters and questions — complete with prepared written answers he’d try to read — it didn’t look good. He started looking blankly around the room. He starting reading answers, then start rambling. At one point — something about the border — he began an answer, then babbled, stopped looked around in confusion, said, “Oh,” and dug for the reporter list and just called for the next one.

He’s said something like that before. Maybe he thinks its a joke; but you’d expect his puppeteers to steer him away from stuff about being really old, what with the obvious dementia.

Another memorable bit was Biden wandering away from the lecterne towards the reporter asking question. While still several feet from the lectern — and the microphone — he started answering. Then he turned his back on the reporters, still talking. I think he was looking for the lectern because he finally wandered back to it. All still trying to answer the reporter.

So I stopped watching. But I saw this later on Breitbart.

Joe Biden Confirms He Will Run for Re-election in 2024

President Joe Biden confirmed Thursday he would run for re-election in 2024, marking the first time he committed to it.

“The answer is yes,” Biden said. “My plan is to run for reelection. That’s my expectation.”

The other day, someone asked Bye-Biden about the then-upcoming press conference.

During a report on Fox News with anchor Brett Baier, network correspondent Peter Doocy revealed that Biden apparently had no idea on Wednesday afternoon that he has planning to do a press conference.