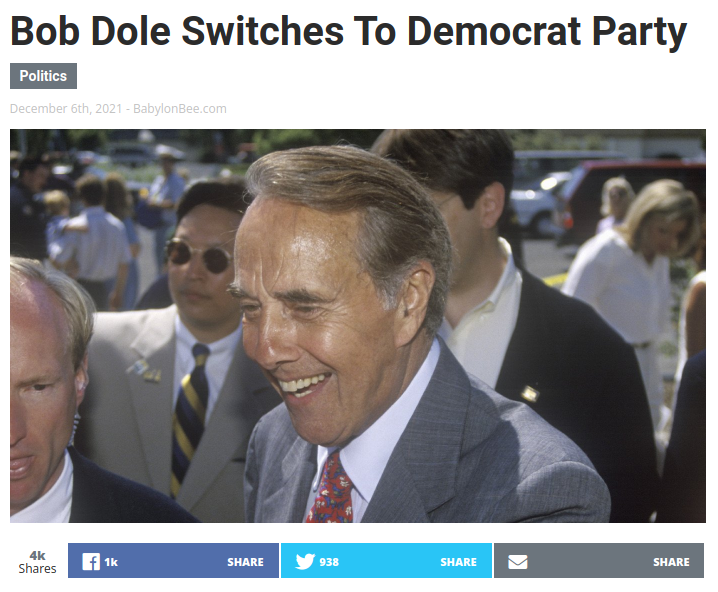 I’ve been waiting for folks to… resurrect the Dole Viagra jokes, but I guess I’ll have to do it myself.

So now we are to fear the Xi “Omicron” ChinCOVID variant. A “variant” symptomatically notable for:

1. Apparently not killing anyone

Yet somehow this variant calls for a variant-specific “vaccine;” something no one seemed to think needed for beta, gamma, delta … mu…

But now we have another notable difference between Xi “Omicron” and all the other ChinCOVID variants.

Researchers from Nference, a Cambridge, Mass.-based firm that analyzes biomedical information, sequenced omicron and found a snippet of genetic code that is also present in a virus that can bring about a cold. They say this particular mutation could have occurred in a host simultaneously infected by SARS-CoV-2, also known as the novel coronavirus, and the HCoV-229E coronavirus, which can cause the common cold. The shared genetic code with HCoV-229E has not been detected in other novel coronavirus variants, the scientists said.

Well, yeah. Genetic exchange when a cell has been invaded by two (or more) viruses is a classic mutation path. But seriously? SARS-CoV-2 strike>Xi “Omicron”?

It wouldbe nice to see a descrition of the Xi “Omicron” spike protein, so we could compare it to baseline HCoV-229E and SARS-COV-2.

If Xi “Omicron” is actually just a common cold coronavirus variant, with differing spike proteins, that might explain why this variant suddenly calls for its very own specific vaccine.

Just got this from Vin. The hot gift this Christmas. 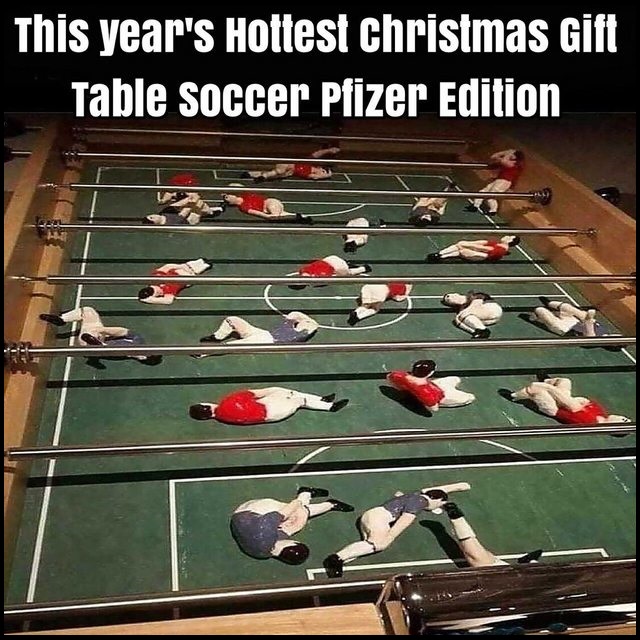 If you only read US news, you may not get it.

More power to him.

High finance, desert rat style: A Jeep transmission bleg update
To date, the tip jar has recorded $1560 in contributions, of which a majority has already made its way to my grubby grasping hands. It brought my bank balance to $2035 and change,

Whatever it takes, I ain’t got.

‘Cuz the math doesn’t seem to add up, Hotez.

Lessee, the first pseudo-vax became available in December 2020. At that time some 370,000 deaths were attributed to COVID.

Since the pseudo-vax has been available, another 429,000+/- have died. But if only 150,000 were us unwashed, ignorant anti-pseudo-vaxxers, then that implies the other 279,000 dead were enlightened vaxxed.

Given those numbers, I think I’ll just go on being “defiant.”

Come near me with this… stuff and I’ll offer you an experimental gun violence vaccine. I mean, what could possibly go wrong with…

Merck’s drug uses a novel approach to fight COVID-19: it inserts tiny mutations into the coronavirus’ genetic code to the point that it can’t reproduce itself.

…a drug that’s meant to cause viruses to mutate. As if they don’t mutate constantly already. Well, there’s always…

But that genetic effect has raised concerns that in rare cases the drug could cause birth defects or tumors.

Among more than 1,400 adults in a company study, molnupiravir reduced the combined risk of hospitalization and death by 30%, less than the 50% initially reported based on incomplete results.

A deliberate mutagen that has less than a 1 in 3 chance of doing me any good at all?

Dang. It’s almost as if they’re trying to drive me into the “COVID/COVID treatments are a genocidal plot” conspiracy theory camp.

Regulators also noted that Merck collected far less safety data overall on its drug than was gathered for other COVID-19 therapies.

Probably because more complete safety data would have been even worse than what they’re admitting.

Rittenhouse Derangement Syndrome is strong in Harvard “Law” professor Ronald Sullivan. This effing idiot attempted to analyze the Rittenhouse verdict to show why it was wrong. If this was a law class at Harvard…

Full stop. You need read no more. If this was a class lecture, I would stand up, walk out, and go to the registrar to unenroll from Sullivan’s course and demand a full refund of all fees. Who wants to spend hard earned money on a class taught by a liar and/or ignoramus?

If you are a sixtyish, frail woman, and some 250 pound, muscle-bound thug sucker punches you in the head, you are not limited to punching back with your tiny fist (assuming you’re still conscious to do so). You can use whatever force you reasonably think necessary to stop a potentially lethal attack. I’m reminded of this:

“Gun control is the idea that it‘s better to see a woman dead in an alley, strangled
with her own pantyhose, than to see her with a gun in her hand.”—T.D. Melrose”

Imagine someone had been arrested for protesting at the Capitol. You’re discussing arguing about it with Joe S. Commie.

Commie states that the Supreme Court has ruled that people have no right to criticize government.

Knowing that Joe Commie is lying, you attempt to cite little facts, noting that the US Constitution recognizes “the right of the people peaceably to assemble, and to petition the Government for a redress of grievances.”

And all of Commie Joe’s collective friends jump your shit for using a disproportionate argument: truth. You’re only allowed to counter Joe’s weak, easily disproved lie with your own made up bullshit, that they can disprove. Facts aren’t fair.

Guilty. See that Legal Insurrection report for a breakdown of who and which charges.Travis McMichael (the son who actually pulled the trigger) is guiltyof malice murder. Daddy and the their neighbor got felony murder raps, due to Arbery’s death in the commission of their own crimes. What with the defendants’ ever changing story, and the apparent near-botch by prosecution — once they got a prosecutor who didn’t have to be recused — I think the jury did a good job of sorting through what really happened. “Roddy” Bryan’s convenient video record of their crimes helped.

Y’all may recall that I thought these bastards were guilty of murder ever since the story broke last year. Unlike some — who assumed that Arbery, being black, was up to no good and got what he allegedly “deserved” — I based my opnion on video, police reports, prosecution letter, witness statements, and the houseowner’s statements to press that nothing had been stolen from his place. I then reviewed the several applicable Georgia laws, and concluded the scumbags were guilty as sin.

A morbidly amusing reminder: This case resulted in Georgia’s “citizen arrest” law being changed; dumbasses assuming that’s what the McMichaels had been up to when they killed Arbery. But the McMichaels hadn’t invoked “citizen’s arrest; that was done months later, by the second crooked prosecutor when he recused himself (worked with the elder McMichael). And, as written at the time, the law didn’t even allow them to make a “citizen’s arrest” of Arbery. At least the jury was smart enough to figure that out.

No doubt the the McMichaels and Bryan will appeal.

They should be learned, but in the folks most in need of the education probably won’t. (Although it does appear some in Kenosha figured this out.)

Things that are peaceable free speech:

Protest
pro·​test | \ ˈprō-ˌtest
1: a solemn declaration of opinion and usually of dissent: such as
a: a sworn declaration that payment of a note or bill has been refused and that all responsible signers or debtors are liable for resulting loss or damage
b: a declaration made especially before or while paying that a tax is illegal and that payment is not voluntary
2: the act of objecting or a gesture of disapproval
resigned in protest
especially : a usually organized public demonstration of disapproval
3: a complaint, objection, or display of unwillingness usually to an idea or a course of action
went under protest
4: an objection made to an official or a governing body of a sport

Riot
ri·​ot | \ ˈrī-ət
1a: a violent public disorder
specifically : a tumultuous disturbance of the public peace by three or more persons assembled together and acting with a common intent
b: public violence, tumult, or disorder

If you wish to engage in protesting as a way of life, learning the differences between these things may be conducive to living out your full life expectancy. Failure to learn could earn you the life expectancy of a mayfly, Rosenbaum, or Huber.

Schools face parents who want to ban critical race theory — and don’t get how teaching works
Part of the problem is that parents think they have the right to control teaching and learning because their children are the ones being educated. But it actually (gasp!) doesn’t work that way. It’s sort of like entering a surgical unit thinking you can interfere with an operation simply because the patient is your child.

Aside from the more obvious points, a major difference between teaching CRT and trannyism behind parents’ backs and surgery is informed consent.

I recently had surgery. My surgeon was extremely skilled and knowledgeable; I’m fairly sure she didn’t graduate in the bottom of her class. Prior to surgery she — and host of others involved — made sure to explain exactly what she was going to do. When they rolled me into the operating room, I got to watch and listen (briefly, before the drugs kicked in) as she made sure that everyone in the room understood exactly what they were going to do.

Post surgery, she made sure I understood the outcome. She showed me x-rays that proved what she said she was going to do — with my consent, remember — was what happened. I have at least one more appointment with my surgeon to review my progress, to ensure the outcome is what we planned.

Teachers should be so open.

She’s a quack who tells parents she’s going to perform a tonsillectomy on their kid, but really does a “gender reassignment” procedure. Then warns the kid not to let his parents know she mutilated him.