WATCH: WHO chief gives New Year’s speech, claims one thing needs to end in order to end pandemic
“The longer inequity continues, the higher the risks of the virus evolving in ways we can’t prevent or predict,” he said. “If we end inequity freedom, we end the pandemic.” 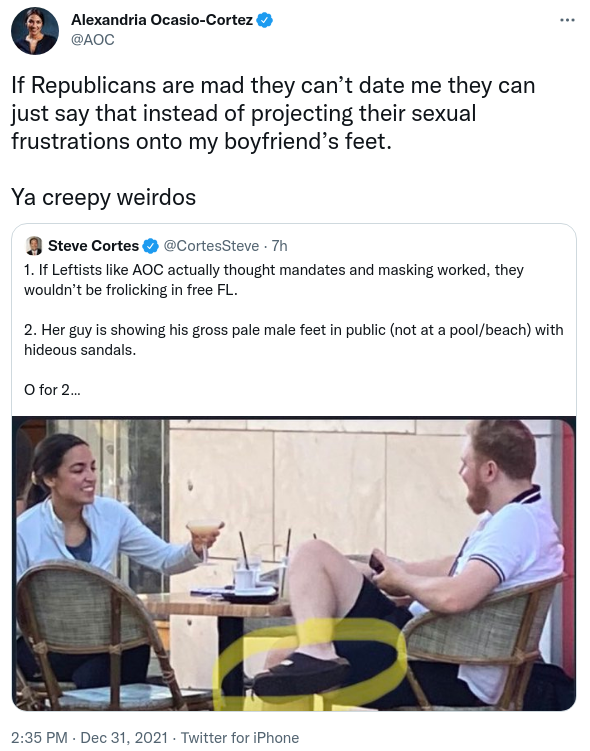 If Republicans are mad they can’t date me they can just say that instead of projecting their sexual frustrations onto my boyfriend’s feet.

Hon, I’ve dated women much better looking than you. And they were even intelligent and had pleasant personalities. So that’s three strikes against you.

I got a pair of shoes for Christmas. I guess my niece noticed what my current Chinese-made pieces of crap looked like.

Skechers. They look like decent footgear… But when I opened the box, what I first noticed was the prominent green tag attached.

Sure ’nuff, no animal products in these puppies.

They are, however, 100%, totally petroleum-based. Yeah, all man-made petrochemical synthetics. Ah, well; these are Chinese-made, too, so at least the pollution from production is over there. 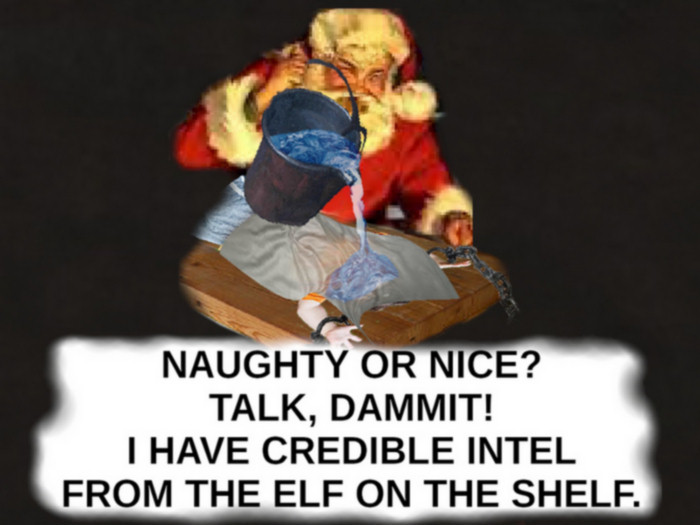 The FDA just issued an Emergency Use Authorization for Merck’s ChinCOVID pill, molnupiravir. If you think Pax is bad, consider this.

Molnupiravir is a medication that works by introducing errors into the SARS-CoV-2 virus’ genetic code, which prevents the virus from further replicating. Molnupiravir is administered as four 200 milligram capsules taken orally every 12 hours for five days, for a total of 40 capsules. Molnupiravir is not authorized for use for longer than five consecutive days.

That “genetic code” would be RNA, the same sort of stuff your cells use to send protein construction instructions to your ribosomes. Unless molnupiravir magically detects just the RNA sequences of all the SARS-CoV-2 variants, and targets only those, you would be at risk of coding errors and mutations.

What could possibly go wrong? It’s not as if this had long term studies watching for issues like cancer and birth defects years down the road. Oh, wait.

Molnupiravir was originally developed to treat influenza at Emory University by the university’s drug innovation company, Drug Innovation Ventures at Emory (DRIVE), but was reportedly abandoned for mutagenicity concerns.

What does the FDA also have to say?

Based on findings from animal reproduction studies, molnupiravir may cause fetal harm when administered to pregnant individuals.
[…]
Males of reproductive potential who are sexually active with females of childbearing potential are advised to use a reliable method of birth control correctly and consistently during treatment with molnupiravir and for at least three months after the final dose.

YMMV, but I can’t see me taking this stuff for COVID-19, especially when the current dominant strain in the US amounts to the common cold in most people. As one pundit — darned if I can recall who — put it recently, Omicron has now killed as many people in the US as Alec Baldwin.

Which may be pushing it, because reports on the Texas death say the person died with it, not of it, and had co-morbidities.

Added: How ’bout that?

“We can’t confirm that the person died from COVID but we can say that he was Omicron positive at the time of his death.”

I don’t know if this is just Biden’s senility showing again, or if the administration really is planning something so stupid. Both?

Biden: It Will Be ‘Weeks to a Month’ Before Hospitals Get Pfizer COVID Pill
During an interview aired on Wednesday’s edition of ABC’s “World News Tonight,” President Joe Biden stated that it will take “weeks to a month” to get the Pfizer coronavirus pill to hospitals, but “it won’t be enough to get to all the hospitals.”

He’s talking about Pfizer’s Paxlovid, the only pill authorized by the FDA for ChinCOVID. But why in hell would they send the pills to hospitals? Per the FDA:

Today, the U.S. Food and Drug Administration issued an emergency use authorization (EUA) for Pfizer’s Paxlovid (nirmatrelvir tablets and ritonavir tablets, co-packaged for oral use) for the treatment of mild-to-moderate coronavirus disease (COVID-19) in adults and pediatric patients (12 years of age and older weighing at least 40 kilograms or about 88 pounds) with positive results of direct SARS-CoV-2 testing, and who are at high risk for progression to severe COVID-19, including hospitalization or death. Paxlovid is available by prescription only and should be initiated as soon as possible after diagnosis of COVID-19 and within five days of symptom onset.

Paxlovid is intended for those who do not need to go to the hospital. It’s meant to prevent the need to be hospitalized.

If this stuff is really any good, send it to pharmacies, so at-risk people who test positive can immediately get a prescription from their doctor (over the phone, maybe?) and then pick it up. That’s what pharmacies are for. Using hospitals as the distribution points will only increase the workload at those hospitals; you know, the one’s the media keeps telling us are already overloaded and understaffed.

On another note, am I the only person who finds the drug name “Paxlovid” a little unfortunate? Fans of Firefly and the theatric Serenity may recall the fictional Pax. It’s the drug administered to the inhabitants of the world Miranda. It killed 99.9% of them, and turned the rest into hyper-violent, zombie-like Reavers.

Maybe I’m just too much of an SF geek, but that strikes me as a marketing blunder.

Our local scam artists just got an early Christmas present. I just received an email announcing that the FAA has issued a site license for Camden County, Georgia’s “Spaceport Camden.”

Don’t expect launches any time soon… or ever, though. The license carries some interesting restrictions before the money-pit can even enter into an agreement with a launch operator. Most of them, if they can be accomplished at, are going to take time and a lot more money.

The real kicker is that the license is limited to a small class of rockets that doesn’t exist. Nor is anyone developing such a rocket.

So far, the county is into this fiasco for $11.5 million. We’re still on the hook for another $1,680,000 for the chemically contaminated property that would be the spaceport (it used to be a Superfund site, but got dropped from the list without being cleaned up; so the county has that liability). But that’s not bad enough.

The license requires the county to also gain control of another contaminated property. Purchase, lease, or use agreement; cost unknown, but likely to be million$.

This FAA license is a license for the perpetrators to keep stealing.

I’ve got a copy of the license and Record of Decision. But Steve Weinkle should be posting them on Spaceportfacts.org, where he has diligently been tracking this scam for years. I expect he’ll have the docs up by tomorrow (12/21/2021). If not, I’ll update this post with my copies.

Update: Stever doesn’t have those on his site yet, so here they are.

Added: Apparently us folk who oppose this dipshit spaceport are “being funded by millionaires.” I need to call the police and report that my checks have been stolen. I can really use that money.

..and I’ll start mispronouncing it.

Biden Expodentially Compilation video: view at your own risk.

I’ve noticed a growing trend in the news. Maybe a week or so ago, I began seeing mainstream reporting of myocarditis cases officially linked to ChinCOVID pseudo-vaccines (such reporting has been routine for months in conservative/alt outlets). And I’m seeing these on a daily basis now. But these mainstream reports have something — besides myocarditis — in common.

Myocarditis is rare; don’t worry about it. This Reuters report of a myocarditis death is a classic example.

“…a rare inflammation of the heart muscle…”

“…a known but rare side effect from the vaccine…”

“Despite the rare side effects…”

You need to tell us that three times in one short (265 words) story? Who are you trying to convince; us, or yourselves?

I’d like to see Reuters cover firearms stories that way: A rare Chicago shooting left one dead and two wounded in a rare case of something that almost never happens in Chicago, so don’t worry.

Former Georgia Senator Johnny Isakson has died. It seems to have had no impact on his communication skills. I used to call him Senator Crickets because he would never reply to any inquiries on Second Amendment issues with anything but a vague form reply; much like other pols, but more so. I think his office blacklisted my email address so they’d stop even seeing questions.