I’ve been looking at Georgia’s ChinCOVID Status Report again. New daily cases have been dropping for a month. So has the Infection Fatality Rate for my age group.

But the fun bit is the comorbidity list. Georgia includes the cumulative percent of cases that are smokers. Depending on where you find ’em, estimates of smokers in Georgia generally run around 18% of the population; I’ve also seen outlying estimates of 13% and 30%. But 18% seems to match my personal observation.

All things being equal, you’d expect that 18% of the ChinCOVID cases would also be around 18%. But after hearing some reports from other countries about smokers being under-represented, I started tracking Georgia’s numbers.

It’s varied somewhat, mostly between 6.5 to 7.8%; which means smokers are seriously under-represented. A mechanism has even been proposed: nicotine binds to the same ACE2 receptors that SARS-CoV-2 goes for. If nicotine is there first, SARS-CoV-2 is SOL.

But when the Xi Omicron variant surge kicked in here, that smoker percentage started changing. From the post title, you know how.

Yeah, the percentage has been dropping. As of 1/28/2022, only 4.85% of the ChinCOVID cases have been smokers. Basically, smokers don ‘t seem to be getting ChinCOVID anymore.

It’s time to victim-shame the non-smokers. If they really wanted to protect themselves and others, the least they could do is fire up a nicotine vape once of twice a day.

… and right in to schizophrenia.

How Trash Talk Can Save Biden’s Presidency
Democrats had for his presidency a year ago and the present reality of a stalled agenda, a divided party, a rancid political culture and the haunting sense that he may not be quite up the task of turning all this around in time for 2022 and 2024 elections.

The whole encounter — including Doocy’s genial refusal to get all huffy about Biden’s flash of huffiness — was in its own way quite winning. It was also a reminder of how many memorable Biden moments feature casual profanity or bursts of authentic emotion amid the pervasive phoniness of contemporary politics.

So Harris wants Gropin’ Joe to be more like… Trump?

I thought the lefties were all glad to be done with mean presidential tweets and the like.

I saw a report that the scumbag who shot up Oxford High School in Michigan, killing four and wounding another six, plans to make an insanity defense. I thought I’d check out how Michigan handles that. And I like it.

“Not Guilty By Reason Of Insanity” has always bugged me. The victim is still dead, and the perp gets a clean criminal record (for that offense anyway). It bugged folks in Michigan, too; so they added another verdict options for juries: Guilty But Mentally Ill.

The perp goes to prison and gets psychiatric treatment. Progress is reported to the parole board. Mental evaluations can continue during any parole.

WASHINGTON, D.C. (January 27, 2022) — FPC Law is investigating a purported internal ATF email alleging that businesses which manufacture, distribute, or sell ‘forced-reset triggers’—specifically referring to “Rare Breed and Wide-Open Triggers (FRT Trigger).”— will be subject to forfeitures if they do not surrender “documents and FRT’s” [sic].

While the publicly available copy of the email contains several typographical errors and FPC’s understanding is that it has not yet been verified or confirmed by the agency, out of an abundance of caution, FPC suggests that all individuals, entities, and businesses who are now or have been in possession of ‘forced-reset triggers’ consider the below measures through which you may be able to protect and preserve your rights should ATF contact you, visit you, and/or demand that you surrender any item in your possession.

Reading the whole thing for some suggestions for protecting your rights, if this could involve you. 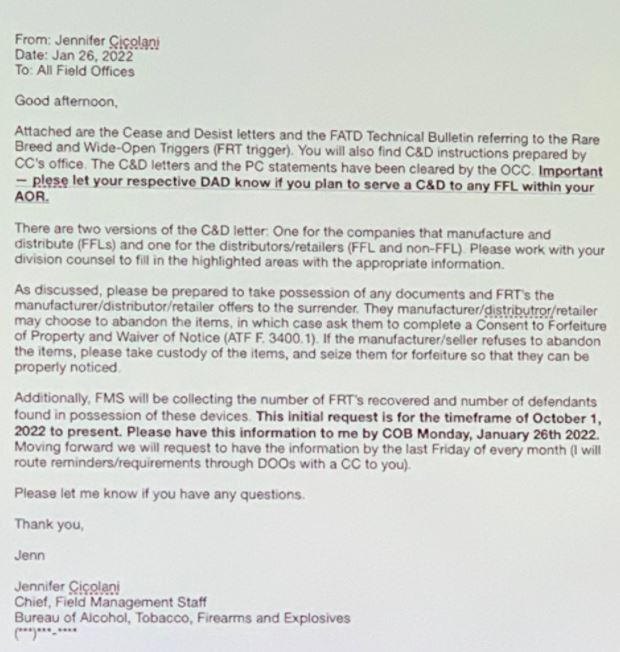 A southern man don’t need him around anyhow

My understanding is that while Spotify merely licensed crybaby’s music, they have an enforceable $100 million contract with Rogan. I suspect that 1) they make more money off Rogan than Young, and 2) Rogan would eat their lunch in court if they broke the contract.

Matt Walsh has one. 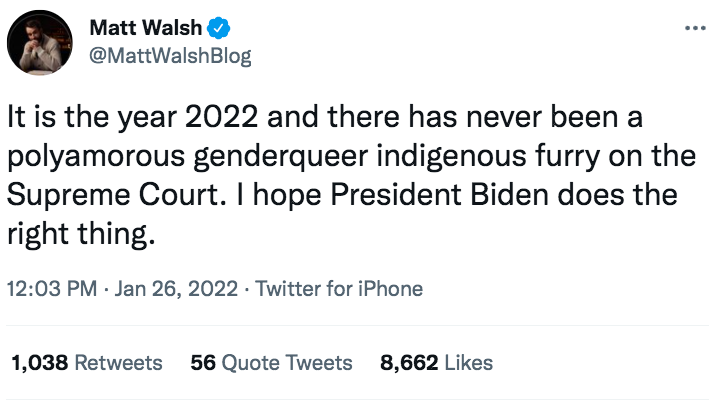 While I’m on the subject… 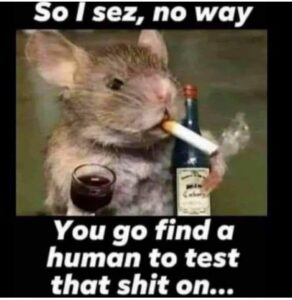 To recap, a truck transporting monkeys crashed in Pennsylvania. Among the first responders was the CDC, not something you see every day.

Then authorities conducted a public health assessment, and advised the woman who witnessed the crash, and came in contact with the monkeys, to be on the alert for “cold-like” symptoms.

The following day, Fallon developed a cough and something that resembled “pink-eye.” And, by Sunday, she was visiting the Geisinger Medical Center emergency room, where infectious disease doctors were consulted. Fallon has since received her first (of 4) preventative rabies shots; as well as a prescription for a 14-day course of Valacyclovir.

She is COVID negative.

Bearing in mind that the CDC made a rapid appearance on scene and issued warnings, and that driver lied about what kind of animals he was transporting, consider this.

Fallon is still processing the sequence of events that unfolded on Friday. She pulled over to check on the condition of the accident victims, but she said they were more concerned about press coverage of the incident.

The driver of the truck hauling the monkeys, identified in a press release from PA State Police, as Cody M. Brooks, 31, of Keystone Heights, FL even went so far as to put his hand in the camera of a local Press-Enterprise reporter. “He was very, very upset,” said Fallon. “He was in a panic.” Brooks passenger, Daniel G. Adkins, 59, of Florahome, FL required transport to Geisinger Medical Center for an injury.

His partner was injured enough to require transport to a hospital, but he’s just worried about press coverage?

Pretty clearly the CDC, at the very least, suspected the monkeys were infected with something specific, since they told the woman what symptoms to watch for. I guessing they knew, thus the panic.

Another batch of Fauxci Moneys for his Mengelean experiments?

Remember the great monkey crash in PA? I thought it was interesting that the CDC responded. It gets more so.

CDC: Three monkeys caught and euthanized after crash near Danville
A public health risk assessment was conducted by several organizations including the CDC.
[…]
Fallon was contacted Saturday by the CDC and was told to monitor herself for any cold-like symptoms.

She shared the letter from the CDC with Newswatch 16; it reads in part that, “the surviving monkeys will be quarantined and will be monitored for infectious diseases for at least 31 days before their release.”

Reportedly, these were recently imported monkeys being taken to a quarantine facility, a normal import procedure.

But oddly the truck driver tried claiming he was transporting cats. The CDC was there immediately. The escaped monkeys were euthanized. And they’re screening for specific symptoms.

I suspects there’s a little more to the story.

An odd report out of Pennsylvania.

REPORT: Truck in PA carrying 100 monkeys crashes, some missing
A truck transporting nearly 100 monkeys in Pennsylvania crashed into a dump truck on Friday, and at least three animals made an escape.

100 monkeys? In a single shipment? My first thought was lab animals. Then I saw this.

Crash update: A small number of monkeys may have fled the crash scene into the surrounding area. If the public spots one, please keep your distance and call 911 immediately. Health and safety of residents and visitors is our top priority.

“Keep your distance”? “Health”? But it only gets… more interesting.

At 9 p.m., Pelachick said state police are investigating the crash and securing the scene for representatives from the Pennsylvania Game Commission, the Centers for Disease Control and Prevention and other agencies.

I’m currently speculating that they are lab animals, and that they’ve been exposed to/infected with something unpleasant.

And while I’ve seen nothing to actually suggest such a link, I confess to wondering if this was another Fauxci-Funded Fuck-up.