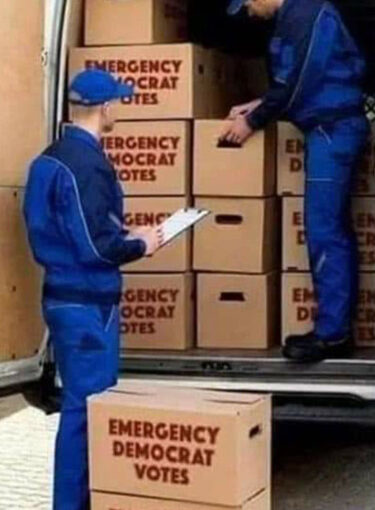 I was considering digging up links to various election… irregularities, but was pleased to find that Gateway Pundit did it for me. Although I doubt that it’s really complete, because every time I check the news I hear more.

Vin Suprinowicz has a nice collection, too.

The Michigan “glitch” that turned thousands of Republican votes into Dem votes: No, it was not a “glitch.”

I started programming in the ’70s. I expanded into computer hardware in the early ’80s. I’ve seen possibly every possible glitch you can see. Hell, in the Air Force I was the prime glitch tester for the Rhein-Main Special Maintenance Team because I had a knack for dreaming up whatever typo or bad data some clown in the field could come up with. Glitches crash the system, or repetively repeat an obviously bad output (it’s consistent), or spew unrecognizable garbage.

Glitches do not surreptitiously change only some Rep votes into only Dem votes, and only enough to shift the results of the election without being noticeable except to someone very familiar with voter demographics (which is exactly how it was caught). That’s hard programming, not a glitch or error.

And even if only a mere error, likely illegal; states generally require election software to be certified. This would be an uncertified change.

In Arizona, poll workers pressed the “cast ballot” button for voters (only the voter is supposed to do it) without telling them it meant their ballots would be rejected. No surprise, this happened in a Rep district.

Wisconsin saw counties illegally throwing away “spoiled” ballots. The law requires those be saved for 22 months for audit purposes.

Fulton County, Ga is just a mess. At this time, it looks like they may have 132,000 invalid ballots.

All this is a problem. You cannot just do a recount of ballots and call it good. Mail-in ballots have already been separated from their postal covers and internal return envelopes. So you can’t tell which ballot came from which potentially spoiling envelope. If, if envelopes were saved (and reportedly Fulton and other locales were throwing them away), at most you could determine, “We have X number of bad ballots, but we don’t know which they are.” 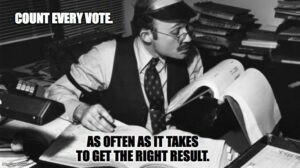 The GOP claims they can document 450,000 bad votes; but again, the the ballots are already separated from the proof, so we don’t know which ones are bad. Although you could start with the tens of thousands of ballots with only a Biden vote and no down-ballot votes…

The only way now to have a election whose results anyone can halfway trust is a complete do-over. Start again from scratch. And even Dems who want Biden elected should agree with that, if they’d just stop and think about the ramifications of leaving this precedent in place: this time, the corruption seems to have elected their preferred candidate…

…but only because he happened to be the preferred candidate of the political machine doing the manipulation. You Dems: your votes didn’t really count either; the machine’s vote is all that mattered. What happens next time if the machine wants someone the voters don’t? Hey, did you originally want Bernie? Recall that he lost the primaries being run on the same questionable voting machines, by the same political machine, that gave you Biden instead of Bernie.

Maybe the do-over should include a primary do-over, which might select Sanders as the Dem candidate.