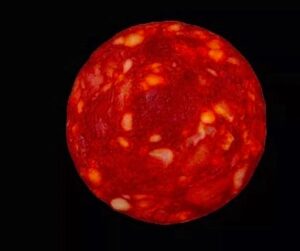 Top French Scientist Admits Photo He Tweeted of ‘Space Telescope Image’ of Nearest Star to the Sun Was Just a Slice of Chorizo
Don’t ever question the scientists because the science is settled.

Top French scientist Etienne Klein tweeted a photo of a slice of chorizo and told his nearly 100,000 Twitter followers that it was a ‘space telescope image’ of the nearest star to the sun.

Tens of thousands of people believed him without questioning anything.

Personally, looking at the image I thought it looked odd. It does kinda look like a red dwarf, but the details are strangely sharp, and light glistens off it around the center.

Etienne Klein admitted it was a prank. But a prank with a rather important lesson.

“In view of some comments, I feel compelled to clarify that this tweet showing an alleged snapshot of Proxima Centauri was a form of amusement. Let us learn to be wary of arguments from authority as much as of the spontaneous eloquence of certain images.“

Darned right. That’s why I spend so much time reading legislative bills and allegedly scientific papers, instead of merely accepting what someone tells they say.