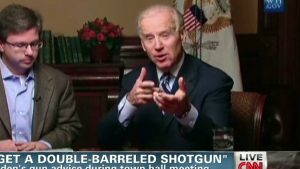 4 thoughts on ““Get A Double-Barrel Shotgun””