Mirror, Mirror On The Wall
Who’s the dumbest one of all? I never expect much sense from victim-disarmers, but the CT Mirror’s Mark Robinson may have set a new low bar.
[Read more]

From the looks of it, Mark Robinson read one anti-gun book by victim-disarmer Saul Cornell, and was stupid enough to believe it.

That was a hell of a carbon footprint. CO2 and particulate pollution from the fire, emissions from responder vehicle, helicopter evac…

What do you care to bet that they used a CO2 fire extinguisher to put him out?

I think climate activists should make this a regular Earth Day tradition.

“This act is not suicide. This is a deeply fearless act of compassion to bring attention to climate crisis. We are piecing together info but he had been planning it for at least one year.”

2. Ol’ Kritee may be in for a world of hurt… for the possible crime of encouraging a suicide, as he just publicly admitted.

Brian Stelter Claims It’s ‘Too Early’ to Tell if CNN+ Was a Failure — After the $100 Million Venture Was Cancelled Less Than a Month After Launch
“It’s too early to know if this product, if this service was a success or a failure,” Stelter said on his show on the streaming service, which is about to come to an end.

Really? Then I think there needs to be a serious audit of the books. Because the only ways CNN+ might have been a success is if it was meant to be a The Producers-style flop to defraud investors; or possibly some kind of tax write off.

Florida Sheriff Says Homeowners Can Save Taxpayers Money by Shooting Intruders
“If someone’s breaking into your house, you’re more than welcome to shoot them in Santa Rosa County. We prefer that you do, actually. So, whoever that was, you’re not in trouble, come see us. We have a gun safety class we put on every other Saturday. If you take that, you’ll shoot a lot better, and hopefully you’ll save the taxpayers money.”

I can’t imagine that L.A. traffic has gotten any better since the ’80s, so I’m guessing that no one noticed anything different from the usual Friday afternoon gridlock I came to hate.

Gropin’ Joe and his puppeteers still can’t understand why we can’t see their brilliance.

“We’ve Done a Hell of a Job,” It’s Just “Hard For People” to Understand – Biden to Democrat Elitists at Portland Yacht Club Fundraiser (AUDIO)
“What I’m worried about now is that we’ve done one hell of a job, but the fact is things have moved so rapidly, so profoundly, it’s hard for people to understand…let me just give you a few statistics…” Biden said to a group of out-of-touch elitists.

The statistics are just too confusing.

Not confusing at, from the Dim/socialist perspective.

Inflation rates are at a 40-year high

When you deliberately inflate the money supply, you just defined inflation. And this way, he gets to brag on rising wages (on paper, not buying power, naturally).

Gas prices are at record highs

This is one of his two greatest achievements to date. Dims have long wished for fossil fuel prices to go so high that “green, renewable” energy starts to look vaguely affordable and desirable. This is absolutely intentional.

Sure. He established that government has the power to do it. And anything else the puppeteers decide needs to be done.

Millions of illegals flooding over the US border

2020 demonstrated that the Dems do not need those future voters. They can manipulate the elections already. And their HR 1 – For Fuck the People Act will codify their system of fraud. So why are they importing illegals now?

Nah. It isn’t cultural terraforming. It’s cultural replacement. Current Americans don’t really want to live in a banana republic, with intermittent “green” power. We’ll just have to go. And be replaced with folks already used to that shit, who’ll be quiet so long as the Dems hand out enough bread.

Wag the dog is always a great distraction for the masses, from problems at home. And it gives him something to blame inflation and food shortages on (never mid that they started long before the current invasion).

13 dead US service members in Afghanistan

They want to neuter the military, if not eliminate it entirely. That was a good start.

The only thing the Dims can’t figure out is why the majority of Americans don’t appreciate them destroying the country.

“Mengele” Fauxci’s office has what may be the most (unfavorably) impressive “I Love Me” wall I ever saw. 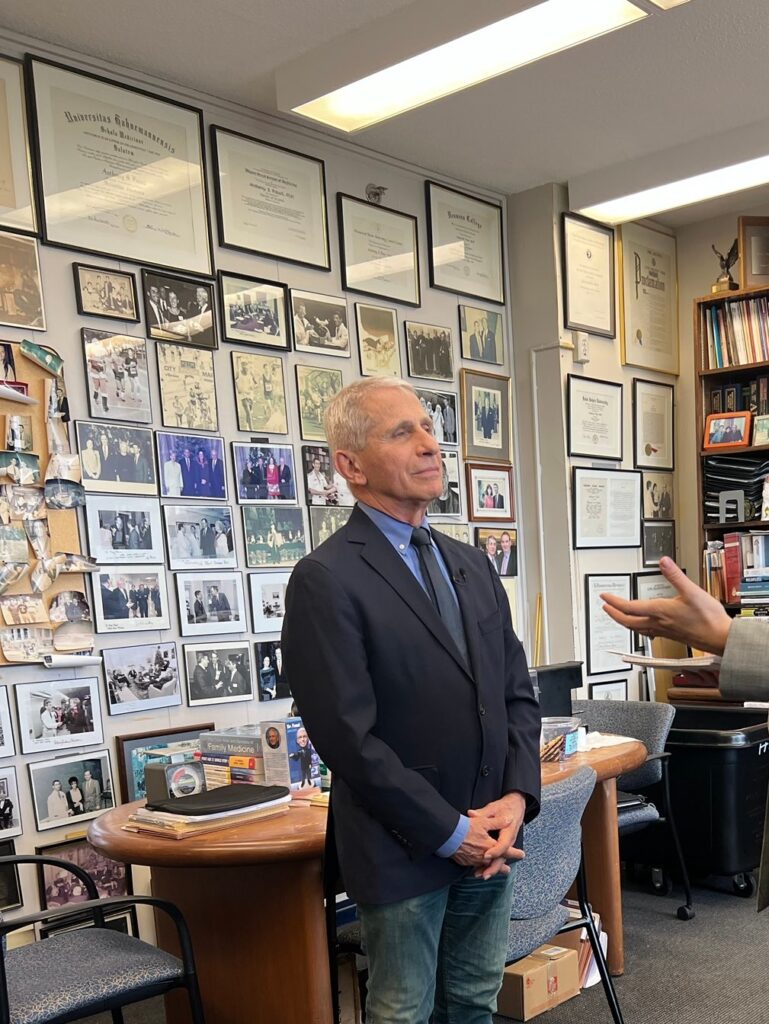 Wall to wall, and floor to ceiling.

And I thought I saw some doozies in the Air Force.

That’s the question Mike Huckabee asked. And he outlines quite a bit of Hunter-related details to suggest that the SOB (Senile Old Bastard) is eminently blackmailable, especially by China.

For most folks, it would appear to be a good case. But Mr. Huckabee is overlooking a very important point.

Blackmail requires a couple of elements.

1. The perp has to have (or appear to have) dirt on the subject.

2. The subject has to give a shit. He has to fear consequences of the dirt going public.

In Biden’s case, I’m fairly confident that #1 is in place. But #2? Not so much. The Biden’s have never faced any significant consequences for actions in the past, so I don’t see Gropin’ Joe sweating any now.

The problem isn’t that the Perv-In-Chief is blackmailable; it’s that he’s eminently — and demonstrably — buyable.

This is an Internet first for me. I clicked a link to a CBS report. This is what I got. 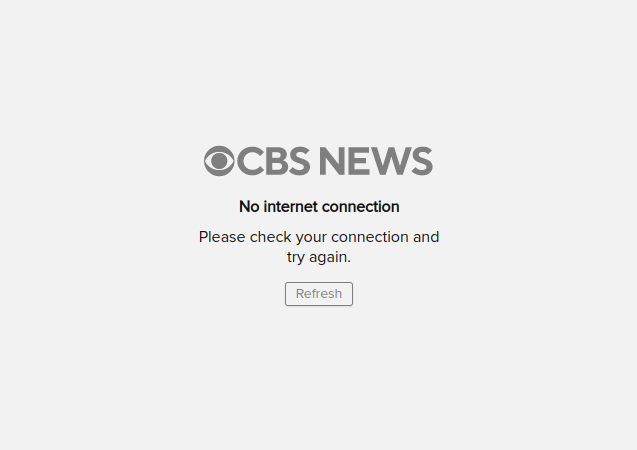 If I have no Internet connection, how –pray tell — did CBS send me that screen?

Here’s the story. Cop detained a kid for shoplifting. Took him home to his father instead of arresting and charging him.

Daddy’s mad at the cop for “abusing” his little repeat offender.

Saw this bit of crap.

Support for Mask Requirements in Public Persists Although Worries about Infection Continue to Decline
Fifty-six percent of Americans favor requiring the public wearing masks on planes, trains, buses, and other means of public transportation, compared with 24% who oppose and 20% who don’t have an opinion about the requirement. Americans are also more likely to favor than oppose requiring people at crowded public events and workers who interreact with the public to wear face masks.

I found that rather dubious, so I dug into their poll data. Basically, the “support” comes from Democrats. Which meant I had to dig further, until I found this breakdown of polled people by party.

The problem is that Republicans are the plurality, not Dimocrats, and have been for most of a year. 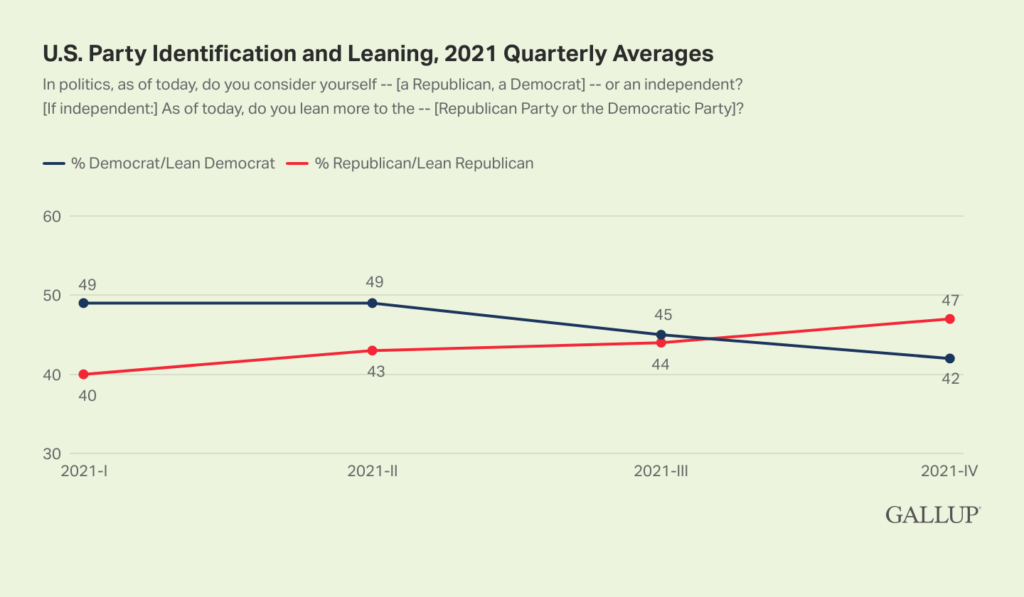 Per AP’s methodology they specifically and deliberately selected to over-represent Dims.

Unknown is why a bunch of Dims — who believe masks work — think their masks don’t work, and demand that everyone else wear one to protect them. Except… they’re dim.