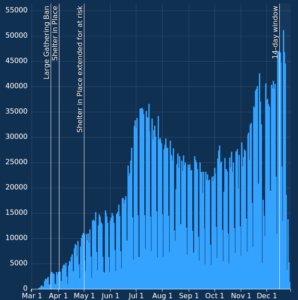 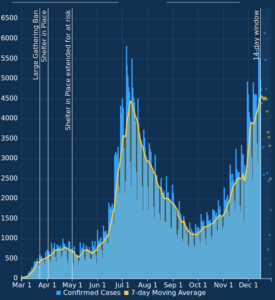 Doesn’t look good, does it? But wait; let’s look at that surge in deaths. 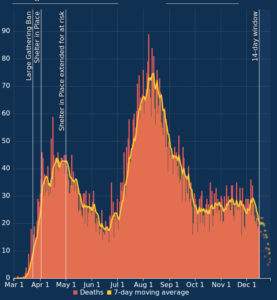 Huh. How peculiar. It’s almost as if record-level testing is simply finding the widespread mild/asymptomatic cases I predicted several months ago. Or maybe we have a lot of Coca-Cola drinkers.*

For those interested, the Infection Fatality Rate for 50-59yo (my age group, and where it starts getting “bad”) is…

Another interesting factoid: Around 17% of Georgians smoke, which the state tracks as a “co-morbidity.” You’d expect around 17% of ChinCOVID positive cases to be smokers. But it’s currently running 6.85%. Smokers are seriously under-represented in ChinCOVID cases.

In related news, seasonal flu seems to be virtually non-existent. I found this CDC chart of deaths to be fascinating.

And look at flu testing.

A cumulative total of 720 positive flu tests? Nationwide? For the same timeframe last year, we had millions. But if surgical complications, vehicle crashes, gun shots, et al can be “ChinnCOVID,” why not the very similar flu?

In the ER where I work anyone coming in with symptoms of an upper respiratory illness gets tested. The list of lab tests ordered shows up on a computer trackboard I can monitor. In the past such patients were tested for Influenza A and B. Since the current insanity started all symptomatic patients are being tested for Covid. I have NOT SEEN A SINGLE PATIENT tested for Influenza since spring. They are ONLY tested for Covid. You CANNOT track influenza cases if you don’t test for it. In an HONEST SYSTEM symptomatic patients would be tested for BOTH. They aren’t. There is an agenda behind the testing regime. They don’t WANT to track influenza cases. Those numbers don’t serve the agenda.

* The always accurate PolitiFake claims to have “debunked” this. The only problem is that the Fakers reference a Dialab antigen (antibody) test, while “Member of Parliament Michael Schnedlitz administered a COVID-19 PCR test.” Dialabs makes three rapid ChinCOVID tests: two are specific PCR tests, while the third is an antigen test. PolitiFake seems to have confused them.